Freedom on the Net 2019 - The crisis of social media 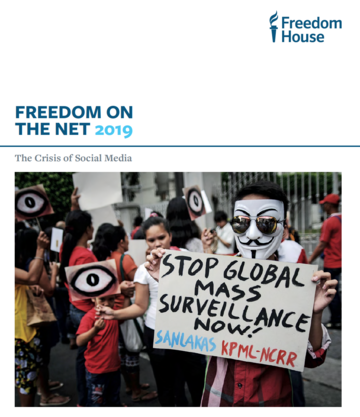 In 2019, global Internet freedom declined for the ninth consecutive year, and one of the reasons is tied to the role of social media in exposing citizens to an unprecedented crackdown on their fundamental freedoms.

While social media provide people with space for civic discussion, they are now also used to facilitate surveillance and electoral manipulation, and have also enabled the collection and analysis of vast amounts of data on entire populations.

Politicians and hyperpartisans use digital means to manipulate elections

Even though Russia and China have been implicated in cyberattacks and information warfare linked to elections in democratic states, most of the analysed cases involved domestic actors.

The booming commercial market for social media surveillance has lowered the cost of entry, and governments are increasingly purchasing sophisticated technology to monitor their citizens’ behavior on social media. Advances in artificial intelligence have opened up new possibilities for automated mass surveillance, causing even stronger chilling effects on free expression and squeezing the space for civic activism on digital platforms

40 of the 65 countries covered by the report have established advanced social media surveillance programmes, meaning that 89% of Internet users (nearly 3 billion people) are being monitored.