The report Freedom of the net 2014, by Freedom House, reveals how internet freedom around the world has declined for the fourth consecutive year, with a growing number of countries introducing online censorship and monitoring practices 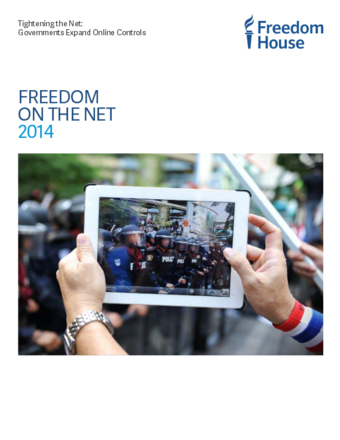 In a departure from the past, when most governments preferred a behind-the-scenes approach to internet control, countries are rapidly adopting new laws that legitimize existing repression and effectively criminalize online dissent. As a result, more people are being arrested for their internet activity than ever before, online media outlets are increasingly pressured to censor themselves or face legal penalties, and private companies are facing new demands to comply with government requests for data or deletions.

The growing restrictions at the national level are also changing the nature of the global internet, transforming it from a worldwide network into a fragmented mosaic, with both the rules and the accessible content varying from one country to another. Russia, Turkey, Ukraine and Azerbaijan are among the 5 countries registered the sharpest decline. Among the key elements determining the decline of freedom of the net, the report list the proliferation of repressive laws; increased surveillance; new regulatory controls over online media; More arrests of social-media users and the use of more sophisticated and widespread cyber attacks.