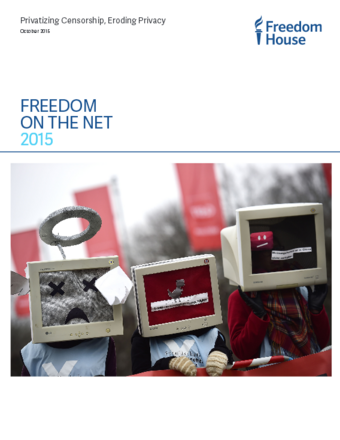 Freedom on the Net 2015 finds internet freedom around the world in decline for a fifth consecutive year. According to the report, more governments censored information of public interest, while also expanding surveillance and cracking down on privacy tools. In particular, four main developments were observed. Firstly, removals of web content dealing with political, religious, or social issues affects an increased number of countries: from 37 countries in the previous year to 42 countries in the current year. Secondly, arrests and intimidation by the state because of undesired information sharing have increased significantly. Moreover, surveillance laws and technologies have multiplied: in 14 of the 65 scrutinized countries, governments have passed new laws to increase surveillance since June 2014 and many more upgraded their surveillance equipment. Last, governments increasingly undermine encryption and anonymity on the net by stigmatizing encryption as an instrument of terrorism and limiting tools that protect privacy.