This report is part of  Media Influence Matrix , run by CMDS through a global research and advocacy alliance with the aim of investigating the profound impact that rapid shifts in policy, funding and technology are having on journalism today. Each country report consists of three studies, covering politics and policy, journalism funding and technology 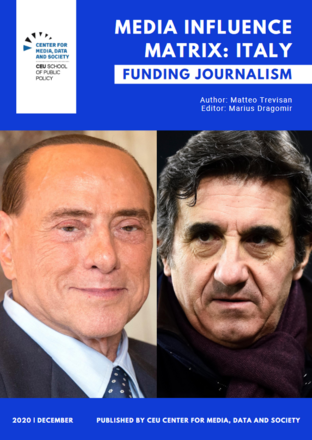 This research by Matteo Trevisan gives a detailed picture of the Italian media landscape including up-to-date data about news consumption, trends, key players and different forms of funding.

One of the main findings of the report is that the pillar of funding for almost all the players on the Italian news media market is still advertising. Although advertising revenues have been generally increasing in the past few years, the percentage weight of advertising on the total market has been decreasing for almost all sectors, except for online platforms.

About public funding, the author writes: "The current system excludes from direct funding large newspapers such as La Repubblica and Il Corriere della Sera. The categories of newspapers sustained by direct financing are those published by cooperatives of journalists, foundations, non-for-profit bodies and consumer associations; those targeting linguistic minorities; those aimed at Italians living abroad and those intended for the blind and visually impaired".

The report highlights the main trends of what the author calls "the media diet": "the media diet of at least three quarters of citizens is increasingly characterized by a pronounced cross-mediality, mirroring important shifts in the market. The constant rise of the internet, which jumped to the second position in the ranking of favorite platforms, is certainly the main cause for the shifts in the news consumption. General web consumption scored 79.3% in 2019 when, for the first time ever, revenues from television advertising were eclipsed by thosefrom online ads.

Analysing the trends in the advertising market, the author stresses the fact that "for the first time, in 2019, the online  advertising sales were greater than those deriving from television advertising revenues".

The report also considers the impact of the pandemic both on news consumption and on revenues of the different media.