Gasping for air. Soft censorship in the Hungarian media in 2014

The report by Mertek Media Monitor unveils how state control over Hungarian media is unfolding “slowly but surely”, and how it is exerted in particular through strategic allocation of state advertising, which influences market competition and editorial policies 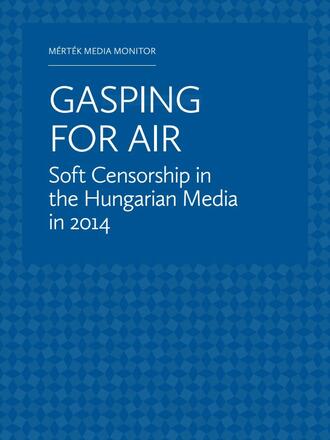 The report by Mertek Media Monitor in collaboration with WAN-IFRA and CIMA (Center for International Media Assistance) examines how state influence over Hungarian media is unfolding “slowly but surely” and has accelerated under the current government. The key findings indicate the allocation of state advertising spending as one of the key elements in the process of state control over the media (Chapter 1). The trends in the media market and their effects in terms of distortion of market competition are presented in the report (Chapter 2), and complemented by the inputs collected in-depth interviews the researchers conducted with journalists, and media experts (Chapter Three). The focus then turns to the opaque system adopted to distribute funds to reward loyal media via state advertising (Chapter 4), to then demonstrate how the licensing practices of the Media Council reshape complete segments of the media market (Chapter 5). The state’s biased advertising spending influences editorial policies in an indirect way, creating a newsroom atmosphere prone to the practice of self-censorship. The report also looks at legal regulations and financial practices of the public-media financing methods, showing that in this field Hungary exerts improper state influence over public media and fail to comply with European Commission requirements regarding state support for public-service media, transforming the Hungarian public media into a state broadcaster (Chapter 6).