This report aims at understanding the situation regarding gender equality and its connection with freedom of expression in over 100 countries. With a focus on news media, it interrogates how media regulators worldwide have approached the mandate to promote and protect gender equality and women’s freedom of expression, whilst attending to obligations to uphold media freedom 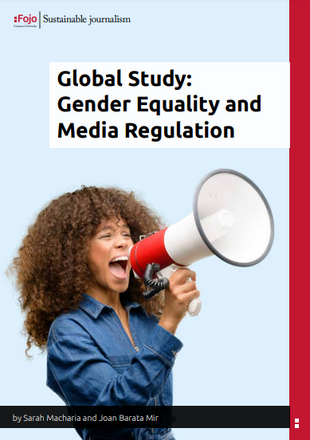 Over the years, a large number of studies have pointed at gender related problems in the news media, both in terms of representation and portrayal in content as well as gender balance in staffing, management and ownership. Such problems are a reflection of norms and structures in societies. The level of gender equality in the media is linked to gender equality in the society as a whole.

This study maps laws and policies to identify measures that promote gender equality in the media. It covers policy instruments adopted at international, regional, national, industry and media house levels in over 100 countries.

Through an analysis of the existing regulation and self-regulation on gender equality in the media, the report highlights a gap between policy and practice regarding gender equality and freedom of expression. Widespread interest in gender equality at the overall international and national level does not appear to filter into statutory media sector regulation.

The most promising way to promote gender equality in the media industry would be to establish proper and efficient self or co-regulatory mechanisms. According to the authors, media regulators should ensure that consistent and comparable sex disaggregated data on the media are collected. Gender provisions should be included in media and communication policies. Media-related provisions should be integrated in national gender policies and strategies.

Tags: Gender in media Ethics of journalism Freedom of expression