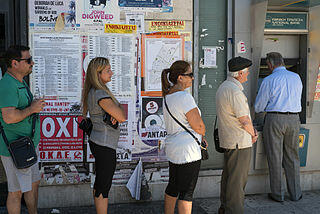 Greece's referendum on the bailout conditions proposed by international financial institutions garnered a lot of attention and debate at both the national and international level. Coverage by national media, however, was predominantly homogeneous in its support of the "yes", to the point of soliciting numerous complaints from viewers and investigations by the District Attorney of Athens, the Greek National Council for Radio and Television, and the Journalists’ Union of Athens Daily Newspapers.

According to the author, however, the major privately-owned Greek television stations largely - and intentionally - misrepresented the question as “Do you want to remain in the Eurozone?”, misleading the public with catastrophic scenarios of a possible victory of the “No”: exit from the Euro, exit from the Eurozone, and deeper poverty.

Despite the imbalance in media coverage, the scaremongering, and the massive international pressure, the majority of voters rejected the bailout conditions. The author uses voter demographics of the “no” to analyse the outcome of the referendum, identifying the following tendencies:

- the average age of "no" voters was between 18 and 24 years old, most of them students and worried for their lack of future perspectives;

- most “no” voters were unemployed or working poors, and therefore heavily affected by old and possible new austerity measures.

These groups, argues the author, had nothing to lose and were therefore unreceptive to the narratives of fear used by "yes" supporters.

Social media also played a crucial role, both before and during the referendum, in challenging the media's dominant "yes" propaganda. Using hashtags like #Greferendum, #Greecereferendum, #OXI, and so on, people shared posts, tweets, videos, and photos, and denounced major Greek media when they cut off the air any opposing position to the “yes” vote. On Twitter, in particular, the #OXI (“no”) vote found extensive space and following.