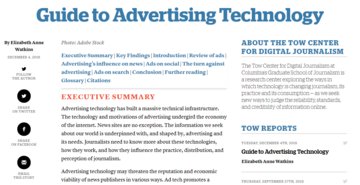 Branding ads are large and sweeping image-based messages. They focus on a set of values that they associate to the product rather than on the product itself. They tend to be used when on the market there are a lot of competitors which are not easily distinguished. They are designed to appeal to large portions of the population. The ad industry has focused on branding since the second half of the 20th century.

Ads that appear on websites come in several formats and are called digital display advertising. As the number of the devices increases (computers, tablets, smartphones, etc.), consumer attention is increasingly scarce and advertisers are competing for it.

Targeted ads are crafted to be as persuasive as possible to a particular group, in a process called targeting. This is possible thanks to consumer data, collected through various ways including browsers, tracking cookies, hardware, etc.. User data are also used to tailor ads based on behaviour and demographics.

Moreover, websites aggregate user data in “inventories” to build the demographics of their visitors and sell ad space to brands and advertisers through agencies. There are different pricing models, based on impressions (viewers), clicks, or actions (click and purchase)

Ad network companies aggregate websites with comparable inventory into bundles, making it easier for advertisers to target their ad purchases. Ad exchange platforms allow to compare the price and quality of impressions and buy them. News websites publish standards describing the formats (with visual templates) that are available for advertisers. They also set terms and conditions about what is expected from advertisers.

The ad tech ecosystem creates many problems to news. It disrupts user experience, slows down the performance of web browsers, and increases data consumption. Ads may also, unknowingly to publishers, contain malware and endanger users' privacy and security. Ad tech may also create incentive structure pushing reporters and editors to make decisions based on the demands of advertising.

Frauds in advertising are possible (e.g. bot viewing). Ad blockers browser plugins are increasingly popular, resulting in less money for publishers. Moreover, ad value has decreased because of the efficiency of the ad market. The efficacy of ads to reach consumers is also generally questioned, and alternative ad models are emerging, such as commissions for sales, with the risk of biased reporting. Some publishers are trying to leave the ad model altogether, with paywalls and subscriptions. There are three general types of paywall: hard, metered (which allows to view some articles per months freely), and leaky/porous (which allows to view articles freely when arriving from search engines or social network).

Ads that appear on searches allow to reach people when they are searching information on a product (“targeting to intent”). There are discussions as whether digital personalisation is contributing to a “filter bubble”, showing people only news that confirm their biases.

The report also includes a glossary.