Handbook on Working Towards Gender Equality in the Media 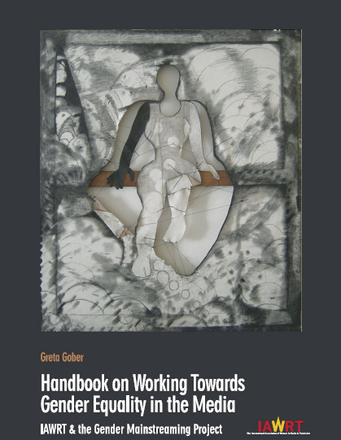 The handbook is structured around the two Gender Mainstreaming Studies that IAWRT conducted in 2014 and 2015 — the Gender Mainstreaming in Broadcasting Survey and the Gender Equality and Social Justice Monitoring. Examples of gender mainstreaming included in this handbook are based on IAWRT’s experiences and best practices of working towards gender equality in the media. It is divided into two parts: actions to foster gender equality in media organisations and actions to foster gender-fair portrayal in media content.

The manual represents the voices and experiences of media women working on the ground to advance gender equality in the media and takes a different approach to gender mainstreaming than would appear from the official definition of this strategy. Officially, gender mainstreaming is a methodology, the process of integrating a gender perspective in all activities carried by an organisation, including its policies, programmes, training, recruitment and evaluations within the main aim to achieve gender equality. The author believes that political and social commitment to advance gender equality in and through the media is important, but it is similarly important to check how these commitments are realised in practice. There is no direct link between the existence of gender equality policies in organisations and high numbers of women occupying decision-making positions in those places. Moreover, there is no necessarily direct link between the numbers of women occupying decision-making positions and the organisation’s commitment to tackle issues of gender discrimination or sexual harassment.

The different approach to gender mainstreaming undertaken in the IAWRT Gender Mainstreaming Project is a natural consequence of a feminist methodology described by Sara Ahmed (2017) as having a feminist ear, that is presented in this handbook in which the official commitment of media organisations to address gender equality is juxtaposed alongside women’s experiences and understanding of what being a female in the media industry entails.

Among the challenges that IAWRT members identified while working towards achieving gender equality in the media, there are the poor working conditions faced by women in the media. Women are denied equal chances of promotion, face sexual harassment, and are often relegated to covering the less challenging stories. In many cases the situation is exacerbated by the absence of a gender policy that could cohesively address gender-specific issues and encourage affirmative action in the organisation.