How Young People Consume News and The Implications For Mainstream Media

This research commissioned by the Reuters Institute for the Study of Journalism is based on two key questions: how do young people consume news? How can news publishers attract young readers, listeners, and viewers? 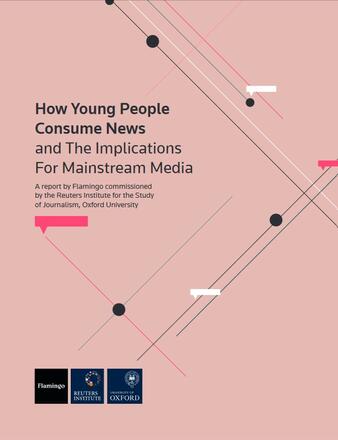 What do journalists need?

According to this report, there is a deep disconnect between traditional news media and young users in terms of perception of values and content.

Young readers and users of news media are different: while traditional media see news as what you should know, young people see news also as what is useful/interesting/fun to know.

Young people are exposed to news in different ways, and news media are not the only source: background or indirect exposure to news is provided by social media, online conversations, documentaries, and TV shows.

Flamingo spoke to individuals in the UK and the USA.

The analysis of young readers' behaviours was split in 3 stages followed by a final semiotic analysis, trying to get to know not only what people usually tell, but also what people do not tell (for example by tracking their smartphone behaviour).

Interviews in the 3rd stage were made in small groups, where individuals had to react to more innovative formats.

Attention was paid to the subjects of the research, young people with their wishes, points of view, interests, differences across moments, usage categories and platforms.
The report recognises four types of news consumers (the Heritage News Consumers, who make a concerted effort to at least consume some of the same traditional news brands that they grew up seeing; the Passive News Absorbers, who are just not interested enough to have any sort of regular relationship with news brands; the Dedicated News Devotees, who have a routine, habitual appointment with their primary news branda nd the Proactive News Lovers, who are committed to news consumption, and no doubt brand aware, but they assume responsibility for collating their news), each with its own potential for news media.

There is no “one-size-fits-all solution”, as each category suggests different approaches: “there is not going to be a single solution for increasing loyal news engagement with younger audiences”.

Other chapters of this report deal with the relevance of the news agenda (“Young people also have a strong appetite for coverage of a broader range of topics in general”), negativity in the news, the tone of the news (it “can at times feel overly serious, institutional, dry, and technical for younger people”), the wrong use of new formats (“a lack of sensitivity to the role each platform plays in the person’s repertoire of social media apps”), trust in the news and the overwhelming amount of items (the so-called "general media noise").

Conclusions and recommendations to media

The study identifies five main challenges for news providers wishing to better engage with under-35s, such as Access and Ease of Use (responding to audience frustration around complex or lengthy news stories), Third Party Spaces (when news content on other platforms is not designed for how young people use the platform), building habits, re-forging relevance, and promoting points of view. This analysis produces three main recommendations to media: