How to Counter Fake News? A taxonomy of anti-fake news approaches

The article provides a first taxonomy of anti-fake news approaches, arguing that contrasting the phenomenon with news laws could aggravate its root causes 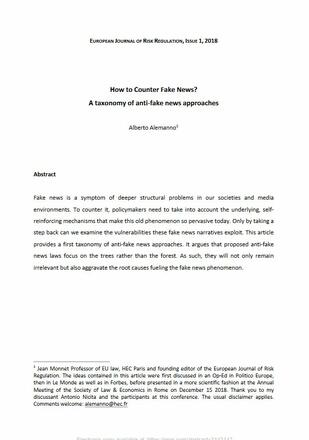 The article introduce the subject stating that although "fabricated information has always existed" its contemporary version tends "to spread globally at an extraordinary pace". This phenomenon meant to deliberately mislead readers and affect their understanding of reality has become a serious problem for the functioning of liberal democratic systems.

The study analyzes three different approaches that have been advanced to tackle the problem, evaluating their possible impact on the issue.

The first approach entails State intervention to solve the problem. However, the policing of the media environment by official authorities has been criticized insofar as it entails the
creation of  ‘Ministries of Truth’. The scholar gives the example of the Disinformation Review office launched by the European Union and devoted to debunk fake news and Russian propaganda. He raises questions on the review process, arguing that it lacks clear criteria for labelling disinformation/fake news, thus raising concerns of violating due process in relation to enlisted sources of information.

A second approach would make Social Media Platforms liable for third-party contents. The expert provides the example of the German Network Enforcement Law (NetzDG) and French president Emmanuel Macron's intention to propose a law to contrast fake-news. Both systems, argues the author, contain one major flaw: "when fake news stories do get denounced as potentially false, or the interim judge is ready to take action, it is already too late and the story has gone viral". The scholar argues that proposed anti-fake news laws “focus on the trees rather than the forest”, adding that “as such, they will not only remain irrelevant but also aggravate the root causes of the fake news phenomenon”.

The third solution prospected in the article is to “swamp fake news with the truth”. In explaining this idea, Alemanno suggests the possibility of introducing a law that would require all social networks to invite readers to have easier access to additional perspectives and information, including articles by third-party fact checkers. This would only systematise a practice already implemented by Facebook on a voluntary basis with its “Related Articles” feature, argues the expert.