This comparative study aims at assessing the achievements in freedom of speech and journalists’ safety in five Western Balkans countries (Bosnia and Herzegovina, Kosovo, Macedonia, Montenegro, and Serbia) 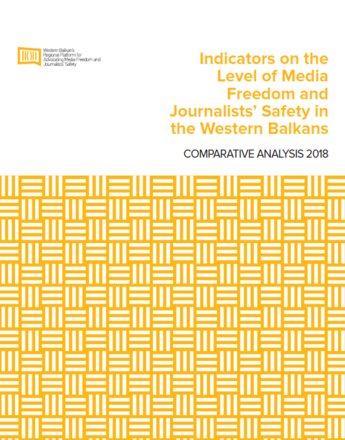 This publication follows a 2016 Report that analysed how political and economic pressures have impacted on media and journalists, and how this has severely limited freedom of expression and damaged the public sphere.

To assess the “state of affairs” of media freedom and journalists’ safety, three groups of indicators were developed.

A. Legal protection of media and journalists’ freedoms

National legislations provide guarantees for journalism and media freedoms, as all countries (except Kosovo) signed international treaties on human rights and their Constitutions contain specific provisions on the topic. Nevertheless, because of the lack of transparency and forms of political influence, these standards are not efficiently implemented. Comprehensive media reforms are absolutely needed, and the legislative process should be open to the participation of journalists’ associations and other civil society actors.

With respect to the freedom of journalists’ work, in all five countries the state does not require any kind of licensing for journalists. However, attempts by authorities to interfere with journalists' work or stop them from reporting on certain events have been recorded, and even though there are journalists’ organisations, they should cooperate more both at national and international level.

Compared to the 2016 Report, regulatory bodies in the audiovisual sphere are still under strong political influence, and this is clearly visible in the non-transparent, political procedures of appointment of their members. State advertising remains one of the most powerful mechanisms of government influence on the media and journalists, and there is an obvious need to develop a specific regulation on this issue.

Even though they have been decriminalised, defamation laws still cause a chilling effect among journalists, mainly because high fines and damage costs are used to pressure and intimidate.

Programme diversity and cultural pluralism in the media are in general preserved through the public broadcasters. Political pluralism in the media is still not ensured, especially outside election campaigns (there are only general principles concerning the representation of diverse political standpoints in news coverage), while legislation concerning the protection of journalists’ sources is mostly in place in all five countries.

Concerning the right to access information, laws are in line with international standards, but are not implemented efficiently and journalists face great difficulties when reporting on topics of public interest, due to the long periods in which institutions are legally allowed to answer.

B. Journalists’ position in the newsrooms, professional ethics, and level of censorship

Associations of journalists are still weak and unable to significantly affect the improvement of journalists' labour rights and economic standing.

Little has been done to improve the independence of journalists’ work in the newsroom, even in the public service broadcasters. As there are no written rules on organisational conduct, almost all media owners exert control over editorial content. The situation changes slightly in the non-profit sector, even though political pressures and lack of stable funding are a concrete threat for these media outlets.

The high level of job insecurity and precarious working conditions make journalists especially vulnerable to political and economic pressures, which in turn leads to self-censorship and deterioration of professional standards.

The general perception is that journalists’ safety is at a low level and that politicians are not interested in recognising the role of journalists as watchdogs of the public interest. In fact, none of the countries involved has taken action to protect journalists. Impunity remains a problem, and despite a slight increase in cooperation between journalists’ associations and state institutions, national systems fail to deal effectively with threats and acts of violence against journalists.

All the partners in the Regional Platform contributed a lot with their advocacy initiatives to raise awareness and alert to the problem of journalists’ safety, and some positive results have been reached.