Influence on the media: Owners, politicians and advertisers

This report, published by the Conrad Adenauer Stiftung in Bulgarian, German and English, focuses on relationships of dependence in the Bulgarian media landscape 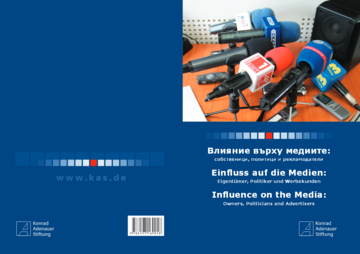 While censorship is legally and politically delegitimized, this reports shows that freedom of the press in Bulgaria can still by no means be taken for granted. The report points out how editorial policy is increasingly manipulated in a less evident way. The report follows a survey on relationships of dependence in the media scene, for which around 100 journalists and 30 media owners were interviewed on topics such as media ownership, conflicts between journalists and media owners, editorial policies, pressures by advertisers and power holders, cases of corruption, financing of media, etc. It then analyses the results of the survey by focusing on the types of media owners and their roles, financial result, support and recent big transactions in the media market, types of pressure and dependencies of media outlets, as well as intra-editorial censorship and corruption in the media. Finally, the authors of the study make a number of proposals for progress in the media landscape and on how the operating conditions for independent journalism can be improved.