Information Manipulation: A Challenge for Our Democracies

The joint report by the French Policy Planning Staff (CAPS) of the Ministry for Europe and Foreign Affairs and the Institute for Strategic Research (IRSEM) of the Ministry for the Armed Forces aims at developing a better understanding of the issue, mainly focusing on information manipulation orchestrated by States and whose purpose is to weaken democratic debate in other States 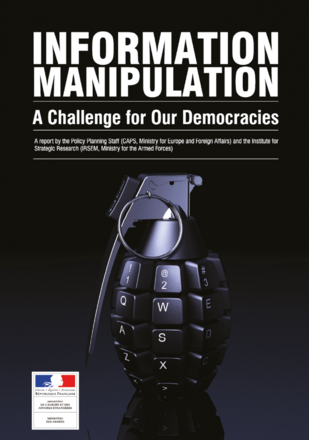 In the first part the report focuses on the right terminology to adopt when dealing with the issue of disinformation. The authors claim that instead of using terms such as “fake news”, “political warfare”, “propaganda”, “public diplomacy” and “disinformation”, that are too broad, vague or misleading, it has to be preferred the term “information manipulation” because manipulation is intended to be intentional and clandestine. The report considers three criteria to assess if there is information manipulation: a coordinated campaign (namely, an orchestrated operation to spread, through various media, problematic contents); the diffusion of false information or information that is consciously distorted; the political intention to cause harm (intended in a broad way). Information manipulation is now a major issue, even though there is a common tendency to underestimate its importance and its negative effects. The report states that is really complicated to assess the effectiveness of information manipulation, and analysing only textual sources, without considering the manipulation that occurs to images and videos, limits a lot the possibility to define a clear picture of the problem.
Following this introductory part, the study analyzes the causes of information manipulation from an individual and collective perspective. It posits that information manipulation is strongly connected to human nature (cognitive weaknesses and a crisis of knowledge that makes us particularly vulnerable), adding that there are also causes that are related to the dynamics of social life (such as a crisis of confidence in institutions, a crisis of the press and digital disillusionment). Next, the study focuses on a specific category of beneficiaries of these activities, in particular the case of States that manipulate information outside their territory and that interfere in the internal affairs of other States. The report analyzes the cases of Russia and China and the evolution of their approach to information manipulation.

The second part of the report highlights certain common features that have emerged during recent information manipulation campaigns and defines several vulnerability factors (such as the presence of minorities, internal divisions, external divisions, a vulnerable media ecosystem, contested institutions) and means (multiform levers and vectors, calibrated narratives, privileged places and mechanisms, massive data leaks, the falsification of documents, electoral interference). Furthermore, case studies from other regions, such as the Middle East, Africa and Latin America are described as well as their specific vulnerability factors.

The third section offers a synthesis of the most common responses adopted by state and non-state actors to contrast information manipulation. There is a special focus on the Macron Leaks case, which is considered particularly interesting because it was a recent failed attempt of interfering with the election. From the analysis it emerges that it would be important to combine a defensive strategy with an offensive one, by providing correct information and avoiding false ideas to spread. But the task requires a lot of time and resources.

Lastly, because of the fact that information manipulation is likely to expand and it will be a long-term challenge for democracies, the authors identify future challenges (linked to technological challenges, future trends in Russian “information warfare” and possible future scenarios) and discuss 50 recommendations for Governments, civil society and private actors.