This report has been submitted to the Culture, Media and Sport Select Committee of the UK Parliament. It analyzes the “fake news” phenomenon by considering the role of the government and technology and the market in the solution of the problem 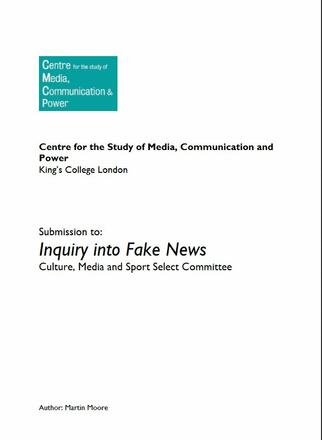 Why Does Junk News Spread So Quickly Across Social Media?

The study states that attempts to define the term fake news have been complicated by its politicization and the general debasement of the term since the US election. President Trump has used the term, often capitalized, on an almost daily basis to undermine mainstream media and news stories he does not agree with. The study does not perceive fake news as a new phenomenon, or limited only to social media. As stated in the paper,  it is a symptom of much broader structural problems with our digital information environment.

According to the study, the difference between the production of fake news for political or financial gain, or for drama or satire and the current phenomenon of fake news is chiefly with respect to its extent, its dissemination, and its effects. Nevertheless, the extent and impact of fake news is contested and, until we have further information, it is hard to draw conclusions as to its effects. There is also an evolving understanding of the different sources of fake news, the motivations of those who produce it, and public attitudes towards it. Hence, “fake news” may partly explain why trust in the UK press has been consistently low, and trust in tabloids consistently below 15% of the population.
The study considers fake news as a symptom rather than a cause. Underlying cause as related to the digital information and news ecosystem that enables and encourages fake news, along with other political and social problems associated with tech platforms – such as dark propaganda, filter bubbles, echo chambers, trolling, abuse and bullying. The political, economic, and social motivations for creating fake or highly distorted news have existed since the invention of the printing press. The extent and impact of today’s fake news is therefore contested and, until we have further information, it is hard to draw conclusions as to its effects.
The study affirms that as there are few penalties for lying or publishing false material on social media platforms, in order to find a solution to this latter, the government should explore the extent to which existing regulations, laws and norms remain relevant in a digital environment. However, hasty responses by governments to the problem of fake news are likely to have unintended and potentially damaging consequences. According to the study, it is suggested that there should be a limit to the nature and extent of intervention by the tech platforms themselves. The scholar believes that the more responsibility these platforms take for identifying and obscuring or removing fake news, the more they will become “arbiters of truth”.

Yet, the long history of fake news, the political, social and economic motivations for producing it, and the ease of self publishing online, mean that technology will only ever partly address the issue.