Get the Trolls Out! is a project aimed to monitoring antisemitic hate speech in Europe. This report reveals the subtle rhetorical tricks that are typically employed to brainwash the public into hating and discriminating against Jewish people 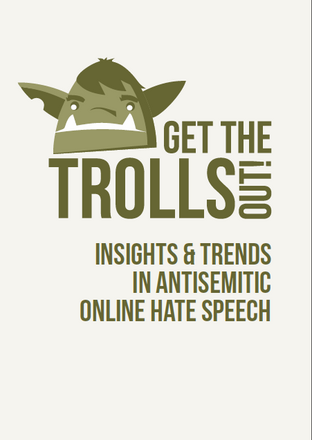 This report is the result a 11-month media monitoring activity aimed to raise awareness of and counter antisemitic incidents, speech and politics, and to promote accurate, balanced and inclusive messages about Jews that counter misinformation.

In all countries where media were monitored – Belgium, France, Greece, Hungary, and the United Kingdom – trolls with anti-Jewish messages revealed a blurring of lines between information available via the media and information in the public domain.

The media monitoring part of the Get the Trolls Out! project gave a number of other important insights into the ways antisemitic discourse enters the public space.

- the resurgence of conspiracy theories;

- the importation of the Israeli-Palestinian conflict to Europe, linked with the confusion between the terms “Jews”, “Israelis”, and “Zionists”;

- the strengthening of myths and stereotypes about Jews that in many cases date back to the Middle Ages and are resurging again today;

- and the denial of anti-Semitism.

The media monitoring has also shown the resurgence and strengthening of antisemitic myths and stereotypes about Jews that in most of the cases date back to the Middle Ages. This trend is present in all project countries, but it is particularly evident in Greece and Hungary. The recurring ancient myths about Jews which are still observed in the media today are the myth of Jews “controlling” the media and politics; the myth of Jewish greed; the myth of a Jewish world domination; the myth that Jews are satanic because they killed Jesus.

This report commits a whole section to analyse current trends in antisemitic hate speech, focusing on the resurgence of conspiracy theory. This (false) theory accuses Jews mainly of two distinct crises that have shaken Europe: the refugee crisis and the terror attacks in Europe, specifically the terror attacks in Paris in January and November 2015. In some cases, these conspiracy theories are linked to the importation of the Israeli-Palestinian conflict to Europe and the confusion between the terms “Jews”, “Israelis” and “Zionists”. Among the countries involved in the project, this trend is especially strong in Belgium, France and the UK. These adjectives are often used without any distinction and are thus distorted from their original meaning.

Another constant trend in today’s antisemitic discourse is Holocaust denial, minimisation, and trivialisation or Holocaust support. Too often, the Holocaust is misused for political purposes, such as making parallels between Israeli leadership and Hitler.

The report offers a “Linguistic Self-Defence Guide against Antisemitism” useful to resist manipulation and it reveals the subtle rhetorical tricks that are typically employed to brainwash the public into hating and discriminating against Jewish people.

Get the Trolls Out!  is an 11-month project (from September 2015 to July 2016) to engage European youth to oppose and combat antisemitism. In particular, the project aimed at raising awareness of antisemitic speech in media outlets.