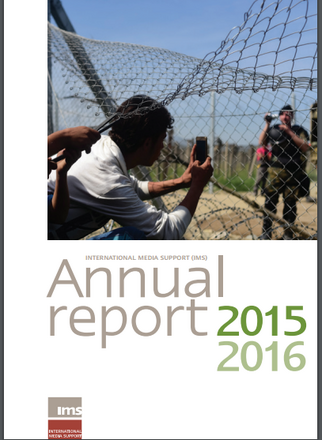 International Media Support (IMS) is a non-profit organisation that works to support local media in countries affected by armed conflict, human insecurity and political transition. Each year, IMS publishes a report in which is shown his work to sustain media freedom and journalists’ independence. This year the annual report spans from January 2015 to June 2016.

The authors underline that the attack on the French satire magazine Charlie Hebdo in January 2015 has been the beginning of a challenging year for independent media across the world and those working to safeguard it. Conflict and government crackdowns on media and press freedom advocates in the Middle East, Africa, Asia, Eastern Europe, and the Caucasus illustrate how explicitly critical voices are targeted by those wishing to curtail them.

In the section dedicated to Asia, written by Lars H. Bestle, the report focused on countries - such as Myanmar, Sri Lanka, Nepal and Bhutan - where the IMS contributed to progress on media law reforms. On the other hand, the increased targeting of journalists by bothterrorist groups and authorities in Afghanistan, Pakistan and Bangladesh demanded a strong focus on improving the safety of journalists.

Meanwhile, with an increase in targeted violence and political pressure in East and Southern Africa in 2015, the IMS focused his efforts on strengthening the safety of media workers and on the production of diverse and balanced content, bridging information gaps and mitigating political or gender-based bias.

The silencing of critical voices through the means of despotism and armed conflict makes the Middle East and North Africa one of the most dangerous regions in the world to practice journalism. Michael Irving and ThoraGehl stressed that, in an environment of killings, threats, imprisonment and stigmatization, the IMS’partners continued to produce high quality news based on ethical and professional standards, illustrating the enormous potential of the region’s journalists, civil society representatives, and human rights defenders. Gulnara Akhundova highlights that Caucasus and Eastern Europe are becoming more important than everas regions to monitor.

Finally, a full section of this year’s annual report is dedicated to IMS partners’ efforts to counter gender inequality in the media. The conspicuous absence of female voices in media hampers women’s ability to actively influence developments in society and IMS seeks to actively address this issue in all aspects of our work.