International assistance and media democratization in the Western Balkans: a cross-national comparison

This report by Irion and Jusic, published by Analitika in 2013, compares the conditions and factors that influence the creation of sustainable and functional media institutions in the democratizing countries of the Western Balkans. It does so by taking into account the strong role played by international assistance programs and conditionality mechanisms. 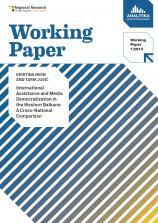 This publication is produced within the project “Development of Functional Media Institutions in Western Balkans - A Comparative Study” implemented in 2012 and 2013 by the Center for Social Research Analitika from Bosnia and Herzegovina, in cooperation with the Center for Research and Policy Making  (CRPM) from Macedonia, the Albanian Media Institute  (AMI), from Albania, and the Democracy for Development  (D4D) from Kosovo. The project is funded by the Regional Research Promotion Programme(link is external)  (RRPP).