Rules on electoral campaigning were written for traditional media. This report examines how the shift to digital media affects the effectiveness of these rules and suggests updates

Publication Date: March 2018
Publisher: Council of Europe
Research and Editorial Team: Committee of experts on media pluralism and transparency of media ownership (MSI-MED)
Link: Internet and electoral campaigns - Study on the use of internet in electoral campaigns 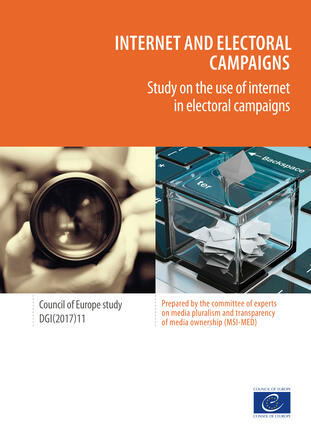 Freedom of political speech is protected, but during election periods it is subject to rules, with the purpose of maintaining integrity, fairness and legitimacy of the elections, guarding against collusion between media and politicians, or the buying of influence over public opinion. Electoral law has regulated campaign communication in various ways: spending limits, campaign finance controls, subsidies for campaigning communications, election silence, broadcast licensing, rules on political advertising, self-regulation of journalists.

Political communication is increasingly shifting online, but digital advertising is still less understood than its analogue predecessors, and is structurally less transparent. Existing rules on the matter appear to be inadequate. This report, by the Committee of experts on media pluralism and transparency of media ownership (MSI-MED) with Damian Tambini as rapporteur, examines the consequence of this shift and makes some suggestions on how to update electoral and media legislation accordingly.

Digital advertising is usually identified as push or pull advertising. Pull advertising is largely associated with search engine and is triggered by keyword, but users can also be targeted based on the device they use, language and regional settings. The business model of this kind of advertising is based on cost per click i.e. if the user clicks on the ad in question, the advertiser (in this case the political party) is charged. The amount they are charged is largely dependent on how popular the service they are advertising is and how closely related it is to what they are offering. Cost per impression, albeit less popular, is another business model of pull advertising.  On the other hand, push advertising is displayed while users are carrying their regular activities online, and offers a myriad of targeting options: demographic, interests, website previously visited, page likes, etc.  The lines between the two advertising types are increasingly blurred because of data sharing across platforms.

Whereas political parties used traditional advertising to reach many people with the same message, digital advertising allows them to reach fewer people. However these advertisings target people with personalized messages, thus augmenting the effectiveness of the message. This allows politicians to make different (and not necessarily reconcilable) promises to different people, or to target only swing constituencies, excluding the others. But this also make it more difficult to challenge or fact-check messages. On the other hand, excluding people because they might already have decided what to vote may also exacerbate positions, while groups less likely to vote risk being further disenfranchised with this move to precise targeting during election campaigning.

Broadcast advertising rules are not applicable to TV content consumed on platforms such as YouTube. Also, it is difficult to monitor the observance of election silence online, and violations may come from foreign websites which are not bounded by the rules. Current financial reporting rules do not require separate lines for social or digital media. In many countries foreign contributions to political campaigns are prohibited. But e.g in Ireland whereas a foreign donor might be prevented from providing funding directly to an Irish-based political party or campaign, the rules do not address expenditure on political activities which are conducted outside the state. Such cases may include digital campaigning disseminated into the state. Crowdfunding also makes it increasingly difficult to track the sources of donations.

Some online platforms have introduced policies to bring political campaigning made through them into line with the national laws. Considering the influence they have they could help a political party or damage another one, and they could do so opaquely, given that the algorithm is not public and that online space is “privatized”. Social media have a role in propagating rumors and misinformation. False stories are often more widely shared than quality news. Huge personal data databases of dubious legality can be be built through social networks and other instruments and can be used for political canvassing and targeted paid advertising.

In the conclusions section the report argues that the safeguards that have been developed to prevent abuse of the political process by traditional mass media must be updated to take account of media change. Election monitors and regulators should pay attention to message targeting, redlining and the undermining of deliberation.

National data protection agencies should watch over the use of personal data for electoral campaign. Platform and intermediaries should develop codes of conduct and effectively enforce national rules. Monitoring methods should be updated to reflect the importance of online campaigning.