Intimidation and mafia influences in the world of journalism and information

The Parliamentary sub-committee mafia, journalists and world of information within the Antimafia Commission monitors the limitations to press freedom caused by organised crime. The report recognises that overcoming forms of exploitation and precariousness and supporting less structured but more exposed editorial activities is a democratic duty

Publication Date: September 2022
Publisher: Parliamentary inquiry commission into mafias and other criminal organisations, including foreign ones
Research and Editorial Team: Parliamentary sub-committee mafia, journalists and world of information
Link: Intimidation and mafia influences in the world of journalism and information (only in Italian) 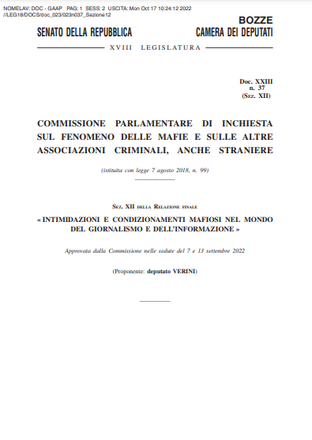 Democracy needs a free and independent press. In this report, the sub-committee recognises the need to give attention to the most exposed journalists: local and investigative journalists who are more often subject to threats, work in difficult contexts and do not have legal offices behind them to protect them. The precariousness in the journalistic profession leads to a further weakening especially in cases where journalists have to face threats from organised crime.

There is a need to promote funding opportunities to prevent cuts from hitting those small newspapers which in complex and difficult territories represent a fundamental instrument of resistance against organised crime.

The report presents the results of over thirty hearings the sub-committee held with media freedom associations. Three main elements are highlighted:

The report stresses that there are two ways to threaten inconvenient journalists or magistrates: either with threats and intimidation, or delegitimisation by politics.

An investigative journalist stated that 'information on organised crime is in its twilight years, because those reporters who have been covering them for years are perceived as inconvenient in their newsrooms and are less and less protected in case of attacks.