“It Won’t Always Be Like This": How to Prepare Turkey’s Journalists for a Freer Era

A study on future of quality journalism in Turkey, based on over 100 interviews, field trips, and workshops: this report proposes innovative solutions such as the opening of “Creative Cafes” and “Journalism Experience Centres”, the sponsoring of international internship programmes, and the mapping of trusted reporters 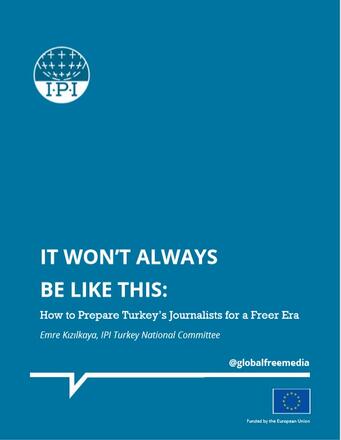 A Manifesto for Sustainable Journalism in South East Europe and Turkey

The aim of the report

Complementary to IPI’s advocacy work, this 30-page study aims to “highlight concrete, achievable steps that can support the production of independent news throughout Turkey” and to give strength to young journalists, helping them understand what is good, quality journalism and how to create it.

An overview of Turkish media

With 2,474 newspapers, 108 TV stations, 3,650 magazines, and 899 radio stations, people in Turkey get their news mainly from digital sources (87%) and from TV (77%) according to a 2018 report by the Reuters Institute for the Study of Journalism. The online sphere “is one of the most vibrant in the world with more than 52 million social media users”.

Threats to media freedom come in the form of imprisonment and other physical threats (as of July 2019, 137 journalists are imprisoned in Turkey according to IPI's own count), mass firings and other economic threats (most media outlets are directly or indirectly controlled by the ruling party, and since 2016 a total of 170 media outlets have been seized or shut down by the government), and censorship, self-censorship, and other professional threats (both in pro-government and in other media outlets).

“During the interviews, one of the most used phrases was 'freedom (of speech, press, media, etc.)' and 'censorship'”.

Journalism students interviewed and met during workshops and field visits are generally resilient despite pressure (52 respondents out of 67 stated that they will become journalists despite the pressures, 8 will switch to another profession, and 7 are not sure yet); they complain about the lack of practical training, modern equipment, internship opportunities, and foreign language knowledge.

Many issues are common in all regions of Turkey: rising costs, falling revenues, areas where no local news outlet operates (the so-called “news deserts”). These problems of course impact on next generation reporters.

Recalling that “the government directly or indirectly controls all news agencies in Turkey”, the author cites two local examples in order to focus on the heart of the problem: how impactful journalism is asphyxiated and where it can still breathe. In workshops with young reporters, the research team looked for creative solutions, finding six proposals to support independent journalism in Turkey:

In short, centralised threats (on the political, economic, and technological level) can be countered only in a decentralised way, “through democratic solidarity among citizens”, combining the old-school principles of top-class journalism with the tools of contemporary media.