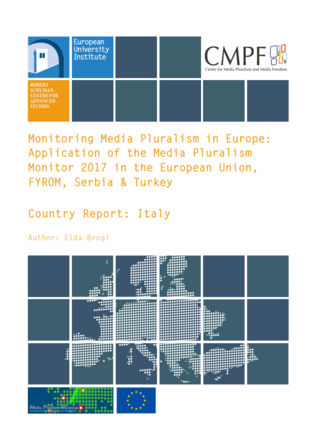 This report presents results and methodology of the 2017 Media Pluralism Monitor (MPM) implementation in Italy. Co-funded by the European Union, the MPM is a tool that has been developed by the Centre for Media Pluralism and Media Freedom (CMPF) at the European University Institute in order to assess the risks to media pluralism in selected countries. The data collected in this research help to better understand the threats to media pluralism in different media contexts and provide useful information for policymakers, researchers, and civil society responsible for implementing advocacy measures, where needed.

According to the research, media pluralism in Italy is “at medium risk in all of the four areas under investigation”. Most worrying trends concern the indicator regarding “the status of journalists and the standards of the profession”, rising threats to journalists, “concentration of the media market and of commercial and publisher’s influence over editorial content”, the “independence of PSM governance and funding”, “insufficient media literacy and access to the media for women”.

The area of Basic Protection includes the fundamental elements of any plural and democratic society: freedom of expression, right to information, status of journalists, independence and effectiveness of the media authority, internet access. In this context, although the Italian legal framework “is generally in line with international standards”, several factors still cause concern. The most relevant include “criminalization of defamation”, “a not totally open” access to the profession, precarization, decreasing average salaries and “chilling effect coming from complaints in regard to defamation”; still, threats and intimidations from the Mafia and “extreme right wing and populist groups” are rising concerns, as well as appointments to the board of the media authority made by political parties and disheartening trends with regard to the indicator on the universal reach of traditional media and access to the internet.

The Market Plurality area assesses the risks to media pluralism that arise from the level of transparency and concentration of media ownership: the research affirms that the Italian media market is only partially transparent, and this is particularly due to the “concentration of the audiovisual market in only a few hands”, “political ownership of one of the main media companies”, the “parallelism of the PSM with political powers” and the fact that “the digital terrestrial audiovisual market is dominated by the two main operators in Italy”. On a positive note, “radio market is not as highly concentrated as the audiovisual one”, while “the indicator on cross media ownership scores an overall low risk”; also, an “important application of the rules on cross media concentration avoided the acquisition of control of Mediaset” by Vivendi, “variables on competition enforcement” received a good evaluation while “regulatory safeguards ensuring that the State funds granted to the PSM do not exceed what is necessary” have been implemented.

In the Political Independence area there is a medium risk, given by a high level of political influence. As stated in the report, in the commercial audiovisual channels there is an evident connection between whichever ruling party at that moment and “the amounts raising from advertising investments by state companies”.  Besides, although “the indicator on the media and the democratic electoral process scores a low risk”, as well as “the indicator on the State regulation of resources and support for the media sector”, “the independence of PSM governance and funding scores high risks”.

This area scores the highest risk, particularly in relation to access to the media for women and Media Literacy. As the report states, the first case “arises from the low proportion of women as both the subjects and the sources in the news”. As for the second, “existing policies are only nascent and the measures taken are fragmented”.