Hungary dismantles media freedom and pluralism: this is the main finding of the international mission that visited Hungary in November 2019, meeting journalists, civil society organisations, a spokesperson of the government, and the Mayor of Budapest 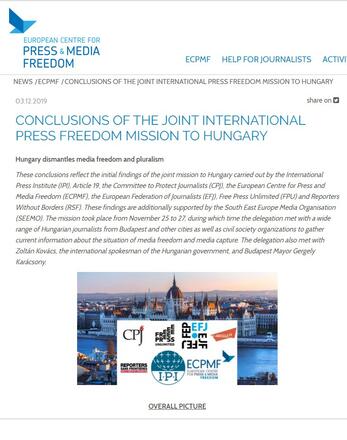 “Since 2010, the Hungarian government has systematically dismantled media independence, freedom and pluralism, distorted the media market and divided the journalistic community in the country, achieving a degree of media control unprecedented in an EU member state”.

Supported by the analysis of the South East Europe Media Organisation (SEEMO), the report lists areas and elements of concern and provides some recommendations, both to the Hungarian government and relevant EU institutions.

The description of the situation is considered abnormal for a Member State of the European Union. All journalists interviewed confirmed that there is a deliberate manipulation of the media market with a delegitimisation of journalists; the system resembles a vast propaganda machine and independent journalists are smeared as political activists, because there is a coordinated system of censorship and content control.

The analysis is divided into 7 topics: Media pluralism, Media market distortion, Public service media, Media regulation, Access to information, Delegitimisation of journalists and situation of precarity, and Role of the EU.

Among all “Urgent recommendations” by the mission (7 addressed to European Member States and 10 to the Hungarian government), one invitation concerns the role and the importance of the European Union, and that is: “Investigate any potential misuse of EU funds to undermine media pluralism and media freedom in Hungary”.