Publishers will struggle to re-establish trust in journalism, while a backdrop of economic and political uncertainty will challenge the sustainability of many news organisations. The Reuters Institute for the Study of Journalism identifies the most important media trends for 2020 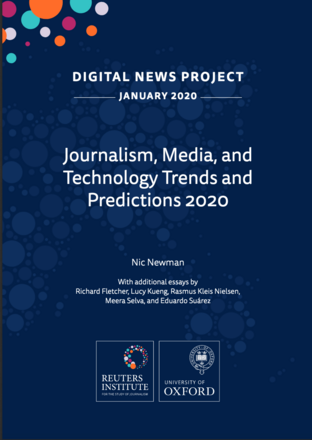 The annual report of the Reuters Institute for the Study of Journalism outlines the most important media trends in the year ahead. Building upon the results of a survey which involved 233 media executives from 25 European countries and 7 non-European countries, author Nic Newman tackles six key topics: 1) business outlook; 2) post-truth politics; 3) platforms and relationship with journalism; 4) diversity and talent in the newsroom; 5) podcasting; 6) the role of AI in the newsroom.

Most respondents (73%) are confident that reader revenue will provide stable and growing income to their organisation, and that subscription and membership models will multiply. However, Newman fears that “serious news consumption will be largely confined to elites who can afford to pay, while the bulk of the population pick up headlines and memes from social media or avoid the news altogether”. In 2020, more publishing mergers are expected with the aim of integrating back-end systems like technology, data, and ad tech.

Media representatives claim to be fighting back against disinformation and misinformation at every level, but to having hardly seen “any impact on large parts of the public”. The respondents do not believe that online platforms are truly addressing the issue, and feel that interventions by policymakers are more likely to hurt rather than help journalism. The emerging audio market can foster further tensions between broadcasters and platforms, until a way of capitalising on the growing popularity of audio formats is found by publishers. An increasing regulation of the Internet is expected in 2020.

As for diversity in newsrooms, media executives rate themselves well on gender diversity, less so on diversity from non-metropolitan areas, on political diversity, and on racial diversity. In 2020, more software tools to help measure diversity are likely to be developed.

AI is already being used by bigger publishers in news-gathering, production, and distribution. In 2020 (and in the next decade) the application of AI is expected to be a defining issue.

The report is supplemented by five essays from the Reuters Institute which analyse 1) emerging business models; 2) threats to media freedom; 3) trust in the news; 4) inter-generational tensions in news media; 5) paywalls.