Journalists and media in Ukraine after Euromaidan 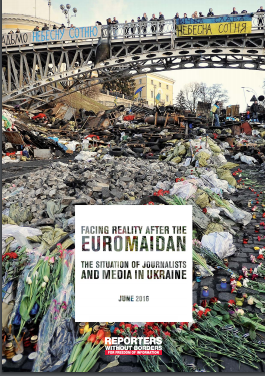 “After the initial optimism during the Euromaidan movement, many journalists have become disillusioned. They are faced with the triple challenge of the war in the Eastern part of the country, the economic crisis and the digitalization of mass media”, notes Gemma Pörzgen, RSF Germany board member who conducted approximately 30 interviews in January/February 2016 with journalists, media experts and observers in Kiev, Lviv and Odessa.

This report by Reporters without borders (RSF) focuses on journalism and media in Ukraine after so called Euromaidan revolution. It deals with the situation of journalists and the media in those areas of Ukraine over which the Ukrainian government has sovereignty. Crimea, annexed by Russia in March 2014, and the separatist-controlled areas of Eastern Ukraine are not considered in this analysis.

Faced with the triple challenge of the war in the east of the country, the economic crisis and the digitization of mass media, Ukraine would be unable to develop the kind of media landscape a democratic society needs to form political opinions and develop a culture of public debate and to provide its citizens with reliable information.

Television plays the main role in informing the public in Ukraine. Private stations dominate the television business. They are owned by four leading media groups, all of which are in the hands of oligarchs. The Ukrainian president Petro Poroshenko also owns his own TV station. Newspapers have for the most part disappeared from the Kiev cityscape and there are hardly any newspaper kiosks left in the centre of the city.

Media experts interviewed by RSF stated that online media outlets have long since overtaken radio and print media as the main sources of information.

Finally, the report analyze the media role in the "hybrid war" against Russia. The war in the East of the country and the massive amount of Russian propaganda against Ukraine have indeed led to controversial countermeasures in Kiev, which partially restrict media freedom. Along with the blockade of the signal of 15 Russian television providers by the Ukrainina government, imposed since August 2014, the broadcasting of numerous Russian TV-shows and movies was also banned. While many foreign journalists and bloggers are banned from travelling in Ukraine, the prolonging of tension is provoking media professionals to adopt a form of "patriotic journalism".