Journalists under pressure - Unwarranted interference, fear and self-censorship in Europe 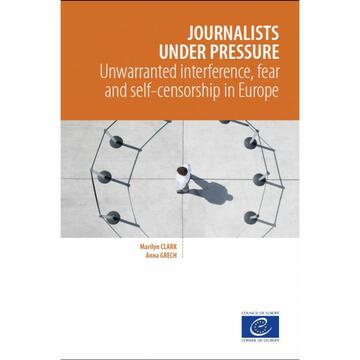 Journalists are under threat in Europe. Different forms of violence against journalists have increased significantly over the last decade: from physical attacks, to intimidation and harassment, targeted surveillance and cyberbullying, we now see a range of tactics deployed to silence critical voices and free speech.

Together with impunity for the perpetrators of unwarranted interference on journalists, these are among the most serious challenges facing media freedom today. Self-censorship is hardly surprising in such circumstances.
This study, conducted among almost 1'000 journalists and other news providers in the 47 Council of Europe member states and Belarus, sheds new light on how these issues impact on journalists’ behaviour. The results of the study provide quantitative evidence on such unwarranted interference, fear and how this relates to consequent self-censorship.

Among the respondents, 31% report having experienced physical assault, 46% have been the target of different forms of threat. Another 13% claimed to have experienced sexual harassment and/or violence. Psychological violence seems to be widespread, as 69% of respondents have experienced it at least once over the last 3 years.

Judicial intimidation affected 23% of respondents, in the form of arrest, investigation, threat of prosecution and actual prosecution under a number of laws.

These striking results confirm the urgent need for member states to fully implement Recommendation CM/Rec(2016)4 on the protection of journalism and safety of journalists and other media actors, and represent an essential and reliable tool for strategic planning in this field to guarantee freedom of expression.