Judicial practice on Media Freedom in Russia: the role of the Supreme Court

An overview of the way a Resolution by the Supreme Court has shaped Russian jurisprudence in the areas of media freedom, regulation of online media, rights of journalists, and access to information 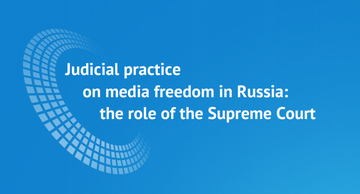 In 2010, for the first time in its history, the Russian Supreme Court adopted a Resolution providing a set of interpretation rules, with the goal of ensuring a uniform application of media legislation across the Russian Federation. These explanations serve as interpretative guidance for the judges at any level and are quoted as arguments for their decisions.

This publication seeks to review the way the Resolution has influenced litigation and brought changes in the statutory law in the Russian Federation over the six and a half years since its adoption, focusing on the following key topics: media freedom (censorship, violation of the freedom of mass media); regulation of online media (including responsibility for content on Internet media fora); rights of journalists (title of the media, protection of journalists’ privileges, public interest, scope of moral damages); and access to information (including accreditation of journalists and transparency of court proceedings).

According to the report, the Supreme Court of the Russian Federation continues to play a crucial role in promoting human rights by instructing judges to give more priority to freedom of the media in their considerations. Despite a generally problematic state of freedom of information in the Russian Federation, in the past six to seven years, judges tend to be more attentive to the need to follow national standards on media freedom as a human right. In this particular context, they feel freer to refer to the constitutional guarantees, as well as to the freedom of expression provisions of the European Convention on Human Rights and the case law of the European Court of Human Rights.

The report highlights that the Resolution’s approach to various issues is also important for the neighbouring countries (e.g., Kyrgyzstan) where the same or similar norms exist in the media law, because their top courts are attentive to the position of the Supreme Court of the Russian Federation.