Kosovo: Indicators for the level of media freedom and journalists’ safety

Working conditions, legal protection and overall safety of journalists in Kosovo are the focus of this report drafted by the Association of Journalists of Kosovo 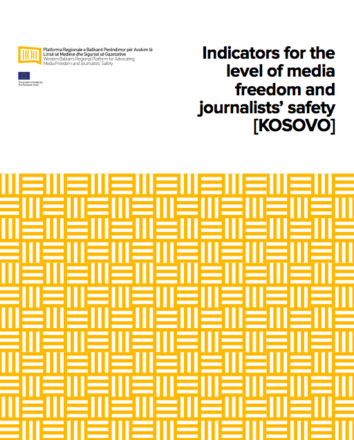 This report presents the findings of the research conducted within the regional project Western Balkan’s Regional Platform for advocating media freedom and journalists’ safety, which was implemented by national journalists’ associations not only in Kosovo but also in Bosnia and Herzegovina, Macedonia, Montenegro and Serbia with the financial assistance of the European Union.

The main objective of the research is to provide base-line assessments which will be further used in a regional mechanism for monitoring media freedoms at local, national and regional level. Being part of a broader project, this research has been conducted on the basis of a common methodology. According to this approach, the level of media freedom can be measured by three indicators: 1) legal protection of media and journalists’ freedoms; 2) Journalists’ position in the newsrooms, professional ethics and level of censorship; 3) Journalists’ safety.

Despite marginal improvements, the overall situation continues to be vulnerable in Kosovo. The legislative framework provides guarantees for freedom of expression, but the implementation of such legal guarantees remains poor: the lack of contracts for journalists is exerted by media owners as a tool of pressure while there are no filtering mechanisms in place in the justice system to deal effectively with cases of threatened or attacked journalists, especially women. For all these reasons, this report includes a list of recommendations for Kosovo’s authorities.

This report is also available in Albanian . The comparative analysis of the five countries involved in the project is available at this link.