The Liberties Rule of Law Report 2022 is the third annual report on the state of rule of law in the European Union, presenting country and trend reports on democratic records by civil society organisations across the European Union. Published by the Civil Liberties Union for Europe, it provides information and analysis from the ground of the state of the rule of law in 17 EU countries 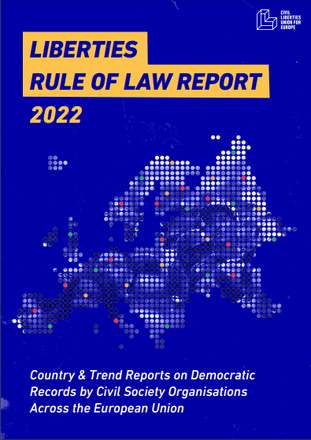 The Liberties report is a ‘shadow report’ to the European Commission’s annual rule of law audit. It lays out the most striking developments concerning the rule of law and democracy in 2021 in 17 countries across the EU, looking at a wide range of areas including the functioning of justice systems, the anticorruption framework, media freedom, pluralism and safety of journalists, checks and balances, civic space and human rights defenders and systemic human rights violations affecting the rule of law environment.

The report includes an overview of general trends in the EU and formulates recommendations addressed to both national government and the EU institutions on how to address the shortcomings identified in each of the areas covered.

The report reveals few signs of progress in the countries analysed, with the stagnation of already existing problems and the strengthening of authoritarianism in different cases. Attempts to capture and control the justice system and media and to curtail the rights of women and minority groups intensified in Hungary and Poland. At the same time, Slovenian government is increasing pressure on the prosecution system, independent media and civil society.

The analysis reveals few efforts by governments in other EU countries to resolve problems that most of them share.