How do news sites handle online rumors, unverified news, and viral content? Craig Silverman discusses what we know, what journalists are doing, and what they should do 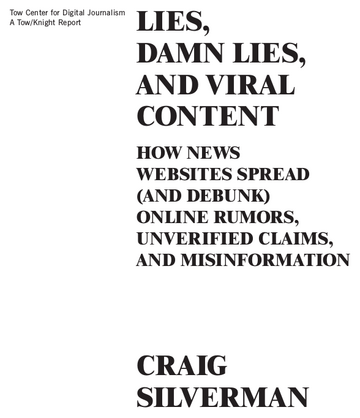 For this research project for the Tow Center, Craig Silverman tracked and analysed the way news sites handle online rumors and unverified claims. He identified rumors circulating in online media, and captured and analysed them using a database (which became a public website called Emergent). He also conducted a literature review and spoke with journalists, skeptics, and other actors engaged in efforts to debunk online misinformation.

Misinformation can come from fake news websites, that differ from satirical websites because they don’t have any satirical purpose. The may not declare their content to be fictional, or they may do it in some implicit or hidden way.

The report also identifies bad practices by legitimate news websites. Many of them publish unverified rumors and claims (sometimes coming from other media outlets) without adding reporting or value, thus becoming easy marks for hoaxsters and the like. Often there is no follow-up, even if the rumor/claim is later revealed to be false. Headlines often are dishonest, declaring that rumors/claims are true. In other cases they are structured as questions, but this still leads to misinformed audiences. Sometimes news sites publish content calling it viral, but it becomes viral only after publication. News organisations which do not engage in these bad practices do not engage in debunking either.

Most articles about a rumor or unverified claim merely “point” to it. “Too good to check” has become a business model: perverse incentives (“strike early or be left behind”) favour moving fast and publishing content that is likely to spread, while the value of restraint is hard to quantify. The bar for what news organisations will follow up on has become lower.

Silverman suggests that “[n]ews organizations should move to occupy the middle ground between mindless propagation and wordless restraint”. That means that not only journalists must avoid spreading disinformation themselves, but they should also actively engage in debunking, and understand how rumors, viral and fake news work.

Rumors fill in gaps of knowledge and information, thus helping us make sense of the world around us. They are different from gossip, which is about social evaluation and maintenance. They can help us rationalise in dangerous situation, but they can also cause panic, and even riots and civil unrest. They have value because, even when false, they reveal larger truths about our state of mind and beliefs.

Four types of rumor propagators are identified: the narrowly self-interested seeks to promote their own interests; the generally self-interested (e.g. the press) seeks to attract readers or attention; the altruistic seeks to help a cause; the malicious wants to inflict pain.

There are cognitive reasons that help explain why and how rumors spread. Even if something is presented to us as a question we tend to think of it as true, because we are frustrated by uncertainty. We are more likely to spread a rumor if we believe it to be true and if it has personal relevance for us. With social networks we can propagate it immediately and to great effect. Networks are not able to discriminate based on the veracity of content; people should do that, but falsehoods are often more attractive and shareable than truth. We prefer information that conforms to what we believe or know, so when we receive it our level of skepticism recedes.

Facts alone are not not enough to combat misinformation. When someone is presented with information that contradicts what they know and believe, they will most likely double down on existing beliefs (backfire effect). Once we learn something we like to stick to it, and we view new information within that context. We cherry-pick data to support what we believe (confirmation bias). When we speak with people who share our view, we tend to become more vehement about it (group polarisation). The more we hear a rumor, the more we are inclined to pass it along (rumor bomb). When we deny a claim, we help it take hold in a person’s mind (denial transparency).

Can debunking be as viral as the fake news that are being debunked? Misinformation seems to be more persistent than corrections, continuing to propagate at low volumes after corrections have faded away. It is often more viral and spreads with greater frequency. People who are exposed to misinformation most of the time do not get exposed to the corrections. The rate of updates/follow-ups to rumors is disappointing. When the correction is published as a follow-up, often the original incorrect story still exists.

Dedicated debunking efforts (similar to political fact-checking sites) have sprung up at news organisations. This is also a maneuver to insert into trending content with “anti-viral viral content”. Often the debunking work can be done quickly and without much effort, just with a phone call or an email, but many newsrooms don’t expect questions to be asked before something is aggregated and pushed out. There are studies that offer evidence of effective strategies, but news organisations and journalists often do not know/practice them. It seems that newsrooms do not remember which sites are fake news sites and their tactics. In its last chapter, the report gives some advice and recommendations for journalists.