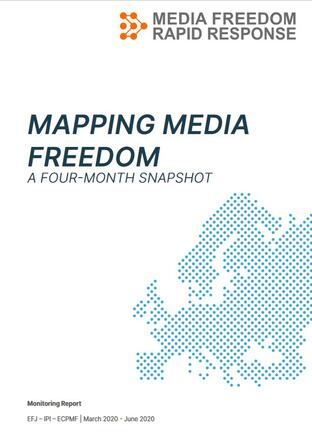 What do journalists need?

The first four months of the Media Freedom Rapid Response have produced this report that summarizes and explains the outcomes of the monitoring activity implemented by the project.

Data have been gathered and checked by experts of IPI (International Press Institute), EFJ (European Federation of Journalists) and ECPMF (European Centre for Press and Media Freedom).

From March to June 2020 there has been a wide range of threats against media freedom, including policy-makers and government officials singling out journalists for harassment, the use of vexatious legal action to stifle independent scrutiny, or attacks on media workers by protesters and police officers.

The sources of these attacks are as varied as the attacks themselves, with police and state security officials, unknown individuals and protesters, politicians and private companies prominent in an apparent shared goal to undermine a free media and limit the citizens’ right to be informed.

The country-by-country analysis is followed by two cross-regional thematic comparative analysis, one focused on COVID-19, the other one focused on threats against journalists and media workers at protests and demonstrations.

As stated in the conclusions, the media landscape is "complex and ever changing" and "threats to media freedom are seldom from one identifiable source alone, use the same set of tools to target, attack or censor media professionals or require the same uniform response to counter".