A report on media policies and regulatory practices in a selected set of European countries, the EU and the Council of Europe 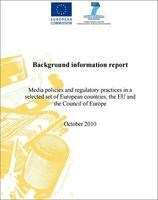 This collective report examines the main dimensions of media policy in 14 European countries, probing into the historical forces, national traditions and distinct political and socio-economic contexts in which media policies have emerged and developed.

The analysis explores the main instruments for media regulation in the countries under study, and assesses the implications of the established media policy strategies for democratic politics. The country chapters follow a similar structure. Following a brief introduction, the analysis focuses on the media landscape of the countries under review, offering an overview of the national media market (the press, broadcast media, online media and news agencies), as well as a discussion of the status of the journalistic profession and media literacy.

The third section presents the major actors involved in media policy-making and proceeds with a succinct presentation and explanation of the national regulatory framework for the media, focusing mainly on structural and content regulation.

The final section provides a critical assessment of the principal issues and trends that characterise the media policies of the countries under study, together with an assessment of the degree to which they enable the media to feed the democratic process. The report also contains a chapter discussing the media-related initiatives of the European Union and the Council of Europe, focusing on the interventions that are of relevance and importance to the protection and promotion of media freedom and independence.

MEDIADEM is a European research project lasted from April 2010 to March 2013 focusing on the factors that promote or conversely prevent the development of policies supporting free and independent media.