This report summarizes the work of MEDIADEM’s project, lasted from 2010 to 2013, providing a synthetic and accessible overview of the project’s scientific and policy outputs 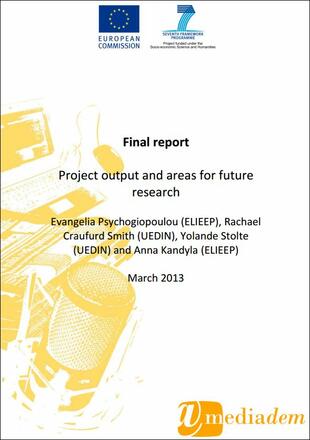 The report critically evaluates the lessons learnt from MEDIADEM’s research and the project’s communication strategies for the diffusion of project findings to various stakeholders at the national and European levels.

The project focused on regulation, its shaping and implementation in specific national contexts, taking due consideration of domestic socio-political, economic, cultural and institutional factors. In addition, it has sought to understand the role the EU and the Council of Europe play in media policy and regulation. The ultimate aim of MEDIADEM has been to identify the policy processes, tools and regulatory instruments that can best support the development of free and independent media in Europe and to formulate policy suggestions addressing policy stakeholders at the national and European levels. The report consists of three parts: project overview; project output and impact, areas for follow-up research.

On the basis of the research conducted, follow-up research directions are singled out in the field of media policy and regulation and media freedom and independence. Possible areas of research in the future are indicated in: The effect of new technologies on news media markets and the media profession; The effect of new technologies on regulatory structures and regulatory capabilities; Copyright, intermediaries and public access to information; Implementation of EU media law and regulation in Member States and candidate counties; The role of the European institutions in the development of a ‘European media code’.