From July to October 2020, attacks on media freedom in Europe took many forms, as the Media Freedom Rapid Response’s second monitoring report documents. Besides anti-lockdown demonstrations and online harassment, the impact of legal actions (SLAPPs) contributed to a hostile climate for journalists and media workers. Find all the details in the second MFRR-report 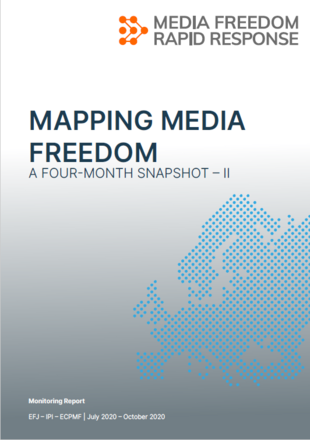 The four-month snapshot of media threats in EU member states and Candidate countries was produced by the Media Freedom Rapid Response partners, European Federation of Journalists (EFJ) and International Press Institute (IPI), with support from the European Centre for Press and Media Freedom (ECPMF). The 114 alerts that were registered between July and October 2020 on the Mapping Media Freedom platform provided the basis for this second report. It follows on from the previous report (link) that covered the period from March to June 2020 and presents an overall picture of the health of the media environment in EU Member States and Candidate Countries, country-specific analysis and thematic analysis that interrogate trends affecting media freedom across the region.

In general, the most common contexts in which journalists and media workers faced threats were public places and streets (33), followed by demonstrations (31) and online/digital (24). As part of a growing trend of anti-media rhetoric, reinforced by increased polarisation that demonises media workers, harassment is increasingly common. This includes a worrying trend of sexual violence directed at women.
Another continuing danger to media freedom is the use of Strategic Lawsuits against Public Participation (SLAPPs) and other abusive legal actions.