The MFRR monitoring report summarises press and media freedom violations across EU Member States and candidate countries from January 2021 until June 2021. Throughout the reporting period, 272 alerts have been documented, ranging from verbal attacks to legal incidents. 438 individuals or media entities in 26 countries have been subject to one or more press freedom violations 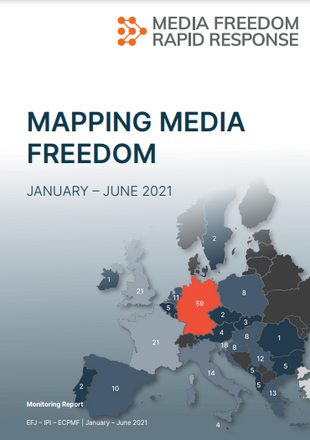 The fourth Monitoring Report is again shaped by the impact of Covid-19 on media freedom.

In the first six months of 2021, most violations of press and media freedom took place at demonstrations. In particular, the press has become a target of anti-vaccination and anti-lockdown protests. Another trend that has been recorded in the reporting period has been the rise of online threats in most countries. Online harassment ranges from threatening messages to death threats and psychological abuse. In some cases, this is done by political representatives and prominent figures, which can incite physical and verbal attacks against journalists and media workers.

Private individuals remain the main source or perpetrators of attacks, followed by police or state security forces and government/public officials.