From 24 May to 2nd June 2021, the partners of the Media Freedom Rapid Response held a series of virtual meetings with stakeholders in Slovenia and this report confirms press freedom is deteriorating in the country under Janša Government 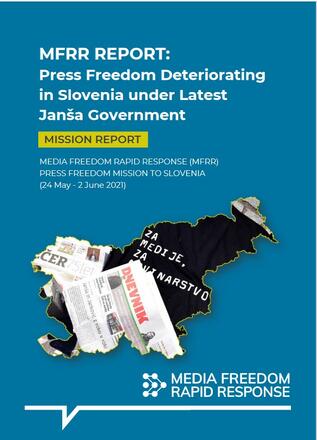 The mission was organized by the International Press Institute in collaboration with the European Federation of Journalists.

Among the final recommendations, there is the invitation to recognise the fundamental role that  independent journalism and  critical reporting  play in holding power to account and  protecting  Slovenia’s democracy; a strong call to take steps to halt the steady deterioration of media freedom is underlined in the final chapter of the report.

Beside that, the MFRR partners together with the European Broadcasting Union, South East Europe Media Organisation (SEEMO)  and Public Media Alliance, invite the government of Slovenia to immediately reinstate sustainable funding for the STA and refrain from further actions which undermine its institutional independence.

Another topic is the delegitimization campaign that was made by public officials against journalists of public television.

In a press release announcing the publication of the report, MFRR underlines that "While legitimate concerns remain regarding post-independence media ownership concentration and transparency in the Slovenian media market, plans by the ruling SDS party would exacerbate those issues or pose new problems. Legislative proposals to tackle alleged bias at the STA would likewise increase political control over its oversight bodies, rather than lessen it".