In a joint mission organized in April 2017 monitored the situation of press freedom and journalists' safety in Macedonia, against the background of a political crisis that worsened what could already be defined as a situation of media captured by political power 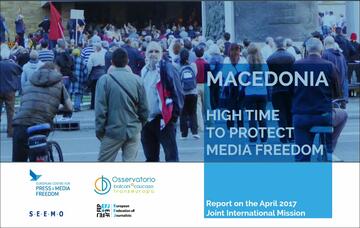 In a joint mission, the European Centre for Press and Media Freedom (ECPMF) , the European Federation of Journalists (EFJ), the South East Europe Media Organisation (SEEMO), and the Osservatorio Balcani e Caucaso Transeuropa (OBCT) observed the situation of journalists and media workers in the Republic of Macedonia.

The on-site research in Macedonia in April 2017 was motivated by the deterioration of the safety of journalists through the increasing number in verbal and physical attacks.

This report indicates that through a complex set of mechanisms the previous government, as well as authorities, gave their best to fully control the media sphere with the final aim to advance and prolong their position and control over media. These tendencies can be observed through analysing the on-ground work and comparing it with theoretical research in a coherent framework of tools and strategies that were used as a sort of blueprint on how to control the media.

One the one hand, political elites demonstrated the unwillingness to protect journalists and freedom of the media, bearing responsibility for the unsatisfactory situation in the country.

On the other side, a fair share of the responsibility lies at international organisations and journalists themselves for not being fully proactive in tackling pressing issues. With the given testimonials of Macedonian journalists and media workers underlining this assessment, the report gives on-ground perspective and first-hand experience on the main issues that are undermining professional journalism in the country.

Finally, the missions’ delegation concludes with recommendations to the newly elected Macedonian government, journalists, and the international as well as the European community on how to change the situation according to international standards.