Macedonia: Indicators for the level of media freedom and journalists' safety

Supported by the European Union, the Association of Journalists of Macedonia has produced a report which intends to assess media freedom throughout three main indicators 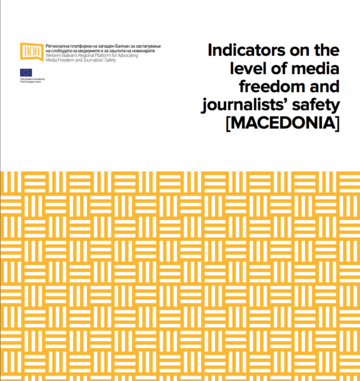 This report presents the findings of the research conducted within the regional project Western Balkan’s Regional Platform for advocating media freedom and journalists’ safety, which was implemented by national journalists’ associations not only in Macedonia but also in Bosnia and Herzegovina, Kosovo, Serbia and Montenegro with the financial assistance of the European Union.

The main objective of the research is to provide base-line assessments which will be further used in a regional mechanism for monitoring media freedoms at local, national and regional level. Being part of a broader project, this research has been conducted on the basis of a common methodology. According to this approach, the level of media freedom can be measured by three indicators: 1) Legal protection of media and journalists’ freedoms; 2) Journalists’ position in the newsrooms, professional ethics and level of censorship; 3) Journalists’ safety.

As suggested by the authors, "the media situation in the Republic of Macedonia is poor and has deteriorated over the past years". Notably, the government is restricting freedom of speech by becoming one of the biggest advertisers in media (it holds around 30% of the media market). In addition to this, the government has failed to undertake measures to sanction attacks against journalists. Media professionals also suffer from economical and social pressure, as only half of them have full-time employment contracts and receive social benefits, while the others have incomes lower than the Macedonian average monthly income. The authors then recommend concrete actions to improve the state of media in the country, such as a ban on all types of state or political advertisements.

The report is also available in Macedonian. The comparative analysis of the five countries involved in the project is available at this link.