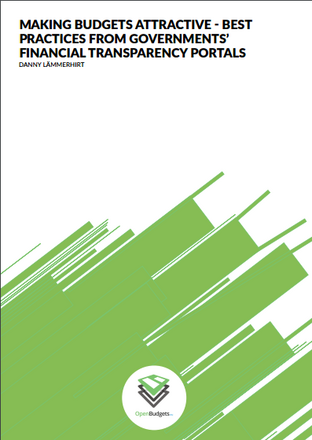 As governments around the world increasingly embrace values of fiscal transparency and a first step in being more open is developing open spending platforms, open data portals have become an instrument for the political debate, for journalistic work to check the government and ultimately contribute to governments’ accountability.

This report sheds light on the best practices and needs of governments providing open budget data. It gives expert insights into the data supply chain(data collection, transfer, translation, visualisation, and use) and points to the factors that increase the propensity of a government to open their data.

This analysis is based on semi-structured, qualitative interviews with government staff members and third-party service providers involved in the technical implementation of open budget websites. Interviews have been conducted over a period of two months, starting in March 1, 2016 and ending in April 20, 2016. A semi-structured questionnaire was used to make findings comparable across cases.

The report analyses the challenges encountered by these actors when publishing and visualizing fiscal data. From these findings, best practices are extracted for translating data, developing comparative tools, visualisations, and interacting with actors within and outside of the government to allow for the publication of fiscal data.

The analysis highlights some of the factors contributing to opening budget and spending data, including legal frameworks, the existence or absence of standardized reporting procedures within government and between government bodies as well as political, cultural and social factors such as trust between government agencies, technical aspects such as data management.

Among the best practicesto ensure delivery of exploitable products, identified in this publication:

The main challenges identified refer to data compatibility, comparability over time, and data availability. Namely, compatibility of data may be fostered or hindered by legal frameworks, which are the most impactful measure to foster data standardization. Moreover, the shifting definitions of budget items may result in the impossibility to compare data over time. Finally a lack of availability.

OpenBudgets.eu is an EU funded project, aiming at supporting journalists, civil society organisations, NGOs, citizens and public administrations, by providing an overview of public spending, as well as tools and appropriate data and stories to advocate and fight for fiscal transparency.