The 2021 monitoring report for the Media Freedom Rapid Response (MFRR) summarises media freedom violations across EU Member States, candidate countries, and the United Kingdom from January until December 2021. The report is divided in 4 main sections which offer quantitative and qualitative analysis of the main attacks perpetrated against media workers during the year 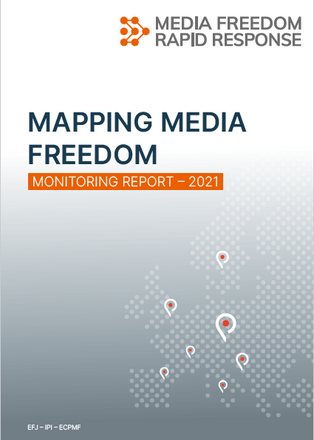 Attacked while covering demonstrations, harassed online for reporting on COVID-19, or sued by private companies. These are just some examples of the threats received by media workers in Europe in 2021. Throughout the reporting period, 626 alerts were documented on Mapping Media Freedom (MapMF), ranging from verbal attacks to legal incidents. 1,063 individuals or media entities were subject to press freedom violations, including the murder of 3 journalists.

In 2021, more than 1 in 4 incidents (26.5% of the alerts) were linked to COVID. The second year of the pandemic started with the deployment of vaccines and growing unrest over confinement measures and health certificates. Protests  against the implementation of these measures increased, and journalists covering them became a target, as explained in the first thematic section of the report. Most media freedom violations took place at demonstrations, where 178 alerts were recorded (28.4% of the total). Those countries with weekly COVID protests such as Italy and Germany experienced several attacks on journalists.

The most common attacks included verbal attacks (41.1%) such as intimidation, harassment or insults, followed by legal incidents (25.4%), physical attacks (21.1%), attacks to property (11.8%), and censorship (11.3%). Surveillance incidents were quantitatively a minor topic but – as the Pegasus files have shown – they affected journalists in several countries.

Attacks perpetrated by private individuals accounted for 41.2% of the alerts, followed by attacks by police (18.5%) and legislation (12.3%).

The first section of the report provides a general picture and includes visualisations and statistics. The analysis is followed by thematic reports focusing on attacks and threats linked to COVID-19 and online attacks. The third section contains country studies on Germany, Turkey, France, Italy, Serbia, Slovenia, Poland, Greece, the Netherlands, Spain, Albania, Montenegro, and Hungary. A final section focuses on positive developments for media freedom that took place during the year, such as the creation by the European Commission of a new Expert group on Strategic Lawsuits Against Public Participation (SLAPPs) or the start of consultations for the upcoming European Media Freedom Act.