Violence against journalists in Europe increased in the second quarter of 2016, reports submitted to Index on Censorship’s Mapping Media Freedom platform show 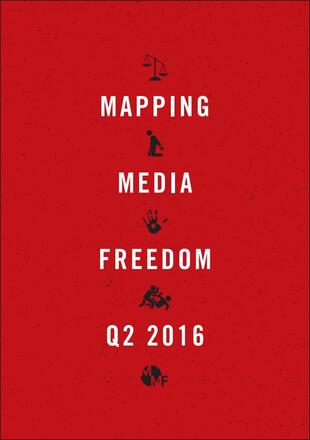 Between 1 April and 30 June 2016, Mapping Media Freedom’s network of 18 correspondents and other journalists submitted a total of 341 verified reports of violations of press freedom to the database, a 13% rise over the first quarter of 2016.

During the second quarter of 2016:

- 60 incidents of physical assault were confirmed;

- media professionals were detained in 41 incidents;

- and media professionals were blocked from covering a story in 73 incidents.

“Europe is considered one of the safest places for journalists in the world. However, increasing concerns about national security in the region – coupled with creeping authoritarianism – is making it an increasingly difficult place for the media to operate freely and safely,” said Hannah Machlin, project officer for Mapping Media Freedom. “And the threats are not just coming from the usual suspects: 12 incidents of injuries to journalists occurred in France and in a number of these cases journalists appear to have been targeted by police.”

Physical assaults and injuries increased by 46% in the second quarter of 2016 to a total of 60. More than half of the violence took place in Ukraine, Russia and France. Journalists reporting on corruption were frequently targeted.

Journalists were arrested and detained at least 41 times for doing their job, a 52% increase over the first quarter of 2016. Most of the arrests occurred in Turkey where the platform verified 18 incidents. The arrests were made under terror or insult charges.

Journalists continue to face increasing financial insecurity. There were 33 incidents of employment loss reported to the map involving journalists in Serbia, Russia, Ukraine, Hungary and France.