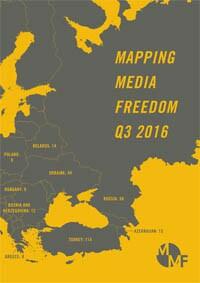 In the period between 1 July and 30 September 2016, MMF’s network of correspondents submitted a total of 406 verified reports of threats to press freedom, a 19% rise from the second quarter of 2016.

In the same period, four journalists were killed: Mustafa Cambaz, photographer with the pro-government newspaper Yeni Şafak, was shot dead by a soldier in Turkey; in Ukraine, Pavel Sheremet, a Belarusian journalist working for online investigative newspaper Ukrayinska Pravda and Radio Vesti, was murdered in a car explosion; journalist and founder of news agency Novy Region Alexander Shchetinin was found dead with a bullet wound to the head in his apartment in Kiev. In Russia, Andrey Nazarenko, a cameraman for state TV channel Russia-1 was found dead in his apartment in Moscow with two bullet wounds – one in the head and one in his body.

Moreover, in the third quarter of 2016, 54 incidents of physical assault were reported; 107 media professionals were arrested; 150 were detained and released; 112 reports of intimidation, which includes psychological abuse, sexual harassment, trolling/cyberbullying and defamation, were made; journalistic work was censored or altered 29 times; and media professionals were blocked from covering a story in 89 cases.

The report pays special attention to the situation in Turkey, where authorities forced more than 2,500 journalists out of their jobs, arrested and prosecuted 98 under trumped-up criminal charges, detained 133 and seized or shut down 133 media outlets, following the failed coup attempt.