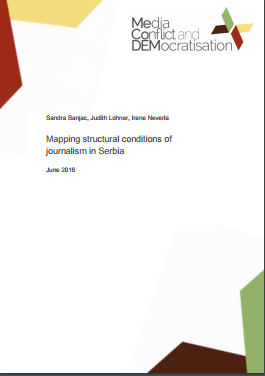 Journalistic performance and journalism culture in Serbia are assessed against the background of structural conditions, defined as the totality of (formal and informal) orders and structures that characterise media and journalism in a certain space. These include elements such as historical developments and the political culture in a given country, existing guarantees enshrined in the legal framework, peculiar features of State control over media and journalistic culture. All these dimension are comprehensively examined in MeCoDEM paper.

Although levels of media freedom increased between 2000 and 2012, journalists in Serbia continue to be subject to political pressure, which leads to high self-censorship and editors reluctant to criticize political figures and officials. Although media freedom is constitutionally enshrined and protected, and laws such as the Broadcasting Act and the Public Information Act are in line with European standards, the presence of inadequate laws and a saturated media market continues to pose challenges for media practitioners.

The gap between legal provision and the actual practice of media freedom is widening. Lawsuits are filed against journalists, most often by police, judges, politicians and businessmen, while relevant laws are not applied correctly by local court judges, or are misinterpreted because judges remain unaware of legal standards (for example defamation law, or libel law, which remain a criminal offence).

Local judges are also likely to be influenced by pressure from politicians or interest groups, and succumb out of fear of placing themselves in danger.

Crimes against journalists in Serbia include assaults, threats or having their cars burned; these crimes are not prosecuted because the police and judiciary often do not get involved. The combination of political pressure, physical threats and attacks, and limited legal protection has had the effect of restricting investigative reporting. Journalists and media outlets are often banned from press conferences (or simply not invited) depending on their reporting reputation or relationship with the political elite.

According to the authors, Serbia’s media market is saturated, the majority of TV stations are commercial and privately owned and approximately 70 TV stations are owned by local governments and media ownership lacks transparency.

The Balkan Investigative Reporting Network’s overview of the distribution of government funding among broadcasters in Serbia highlights the need for these channels of allocation to be transparent in order to maintain fair competition and neutrality in budget distribution across the media market, ensure editorial autonomy, and that funding supports the production of programming content.

In conclusion, media freedom is constitutionally and legally protected; however, the increasing influence of political and economic elites has led to self-censorship and a decline in media freedom since 2012. Journalists also face the risk of lawsuits under defamation or libel laws. This coupled with journalists’ low salaries is putting a strain on the profession, resulting in a decline in the public’s confidence in media and respect for the profession.