Clientelism, politicization and corruption hold media captured and prevent them from carrying out their watchdog role. Media Clientelism Index assesses the situation in 6 countries of South East Europe 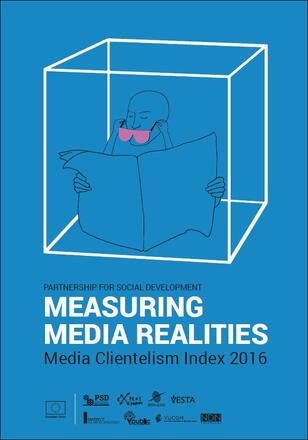 The Media Clientelism Index 2016 explores the ways in which corruption and clientelism affect the media in six countries of south-east Europe: Croatia, Serbia, Bosnia Herzegovina, Montenegro, Macedonia and Romania. The index monitors the media environment and relations between politics, economic centres of power, the media and citizens based on empirical data.

Moving from theoretical frameworks focussed on corruption, the Media Corruption Index measures society’s capacities to detect the exchange of favours between politics, economic centres of power and the media and the ways in which such exchanges lead to deviations in the media’s performance.

In 2016, the Index detected a significant fall in all the countries observed: above all, these countries record a fall in the availability and quality of data, an issue which often remains unexplained.

Serbia and Romania recorded the most significant drop in relation to the previous year’s measurement. Considerable decline was recorded also in Croatia. In Romania, significant political intervention in the media in the previous year is regarded as the main reason for increased risk of media clientelism.

Transparency of media ownership remains a key element in the fight against corruption: as noted in the report, “all attempts to access the business results of privately-owned media proved fruitless in most countries apart from Croatia, and to some extent in Macedonia, in which indicators for television and radio stations were available.”

Specifically, the Index is composed with data encompassing five categories:

In addition to these five categories, the Index is constructed by interrelating other four categories, i.e. 1) the regulatory and institutional capacity of the state to detect and eliminate clientelist practice in the process of adopting media policies and in the activities of media industries; 2) practice in adopting media policies, deterrent to clientelist practices and occurrence of clientelism; 3) the ability of the state, or society, to understand the situation in the media and 4) social capacity to measure media realities.

The Media clientelism index has been developed within the framework of the project Civil Response to Clientelism in Media - MEDIA CIRCLE, implemented by Partnership for Social Development (Croatia) with a consortium comprising eight organizations, including the Expert Forum from Romania; BH journalists and VESTA from Bosnia and Herzegovina; the Public Policy Institute from Montenegro; the Public Association for Research, Communications and Development from FYR Macedonia; the Independent Journalists’ Association of Vojvodina and the Lawyers’ Committee for Human Rights (YUCOM) from Serbia.