Third report as part of IPI’s campaign on media capture: a new report on media freedom and independence in Bulgaria. The report explores the capture of media by vested business and political interests and the corrupting relationship between media owners and politicians as they compete for power and profit 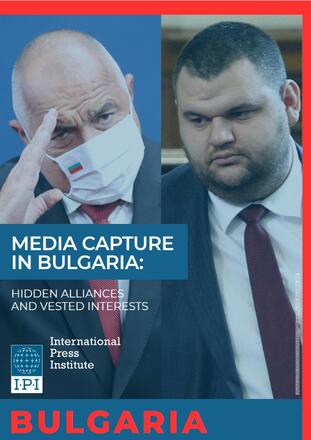 The report finds that the story of media capture in Bulgaria differs from the classic Hungarian model, whose mechanism of operation is only thinly veiled. The Bulgarian picture is murkier, driven by a lack of information over the ownership and business interests of the key individuals involved in a country with  the EU’s highest level of corruption and organized crime, which creates an extra layer of complexity and competing power centres that the media and politicians have found themselves ensnared in.

Bulgaria is ranked as the most corrupt country in the European Union. Here, competing power struggles among politicians, oligarchs, media moguls, and organized crime, and their efforts to win over control of state institutions such as the courts, prosecutors, and media regulators are hidden behind a web of rumours and political scandals, of banking collapses, public protests and politicized prosecutions.

Amid this murky landscape, what is evident is how the powers of the state have been abused to weaken public service media, to pressure private media, to prosecute independent investigative media, and to smear political or critical rivals.

Bulgaria’s new prime minister, Kiril Petkov, has vowed to clean up corruption in the country and already committed to making fully transparent all public funds directed to Bulgarian media. This is an important first step, but the report finds that the government must go much further. It must ensure full transparency of ownership of media, it must end the culture of political interference in the media and in particular ensuring a fully independent public service media.  And it must end the persecution of the independent media sector dedicated to investigating and exposing corruption. The report includes key recommendations to this end.