An accurate overview on the worrying media capture phenomenon that is occurring in Europe, and mostly in its Eastern part, with useful theoretical instruments to understand several dangerous forms of interference in the media sphere 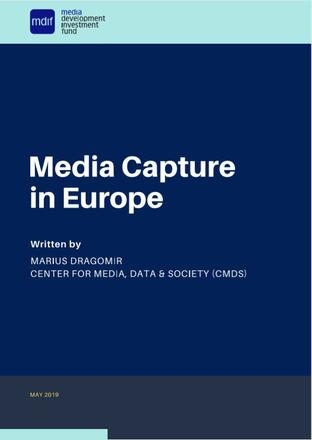 Being the term ‘media capture’ relatively new, the study tries to conceptualise this widespread issue, starting from the definition proposed by Mungiu-Pippidi - “a situation in which the media have not succeeded in becoming autonomous in manifesting a will of their own, nor able to exercise their main function, notably of informing people (...)”-  and identifying, then, a more practical use of the concept.

Furthermore, following Corduneanu-Huci and Hamilton’s approach, the study presents a useful model to determine the intensity of media capture in a given national context. Considering this phenomenon as “a process with its own intensity scale consisting of higher or lower levels of control”, it proposes 4 components that can be used as a tool to analyse the jeopardy of a particular situation. Still, the research presents these components using several examples, taken, in particular, from Hungary and Czech Republic as representative case studies.

In this context, the report highlights a number of interconnected factors that unveil the complex and multifaceted nature of media capture:

Concluding, the author underlines the difficulties in finding policy solutions, “as policymaking and regulation are part of the problem (they are a cog in the media capture wheel)”. “Hence”, he states, “the only solution lies in direct intervention: renewed and much larger investments in independent news outlets, with a focus on new, more disruptive forms and formats of critical journalism able to better reach and engage large audiences”.