Media Capture in the Czech Republic: lessons learnt from the Babiš era and how to rebuild defences against Media Capture

This IPI report examines growing pressure on the public-service broadcaster Czech Television (CT) under the Babiš government. In this light, the report looks at key reform proposals to strengthen Czech public media’s defenses against future attempts to compromise its independence, and it also details how government advertising funds were directed to benefit Mafra media owned by Babiš and recommends policy reform to end the abuse of government funds to reward positive media coverage 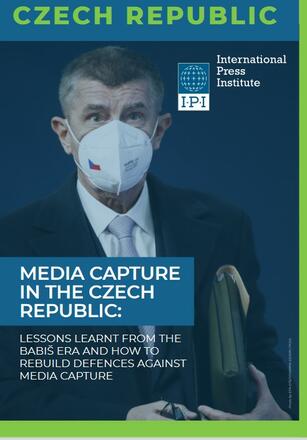 This report was commissioned to examine the situation of media capture in the Czech Republic. It is part of a series of reports produced by the International Press Institute looking into this phenomenon in Central Europe.

As the report shows, media capture in the Czech Republic differs fundamentally from countries like Hungary. Rather than a state-led media takeover, the Czech Republic witnessed the acquisition of many of the country’s largest private media outlets by a handful of oligarchs for whom media could be used to promote their wider business interests. This development had serious consequences for media pluralism and the standards of journalism. Meanwhile, once in power, Babiš arguably sought to mirror certain media-capture strategies adopted in Hungary and Poland, while other oligarch-owned media limited their criticism of Babiš and his ANO party.

The misuse of government advertising to reward positive coverage and punish critical media has become an increasingly significant tool for influencing media coverage in countries where the government seeks to influence and capture the media. The oligarchization of Czech media, a process that included having the owner of the country’s largest media company act as minister of finance and then as prime minister, made the potential misuse of government advertising funds an obvious concern.