Media Economy in the Pandemic: A European Perspective

This report by CMPF assesses the impact of the first wave of the pandemic on the news media economy in Europe. Based on the Media Pluralism Monitor, it presents the results for eighteen European countries 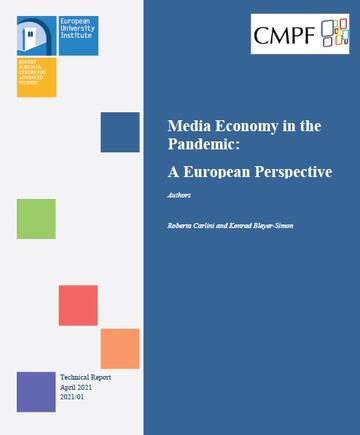 The pandemic has increased the demand for information and has given momentum to the process of digitalisation. However, while news was increasingly consumed online, a vast majority of media outlets was still relying on traditional income sources. The collapse of print sales and advertising revenues left news producers without the resources needed to keep up with the increasing demand. The shift to digital has not counterbalanced the decrease in advertising revenues.

An increased supply of information matched the increase in time spent watching news coverage. This meant a rise in the amount of journalists’ working hours, while some 30 to 50 per cent of advertising revenue disappeared from the media market. For these reasons, most editors and CEOs have expressed an opinion that Covid-19 has accelerated their plans for digital transition.

In the countries covered by the research, revenues for the news media have decreased more than GDP. Print newspapers, followed by commercial television and radio stations, were affected the most, while the digital native sector performed better.

The increased attention for the news did not bring along an increase in revenues.

In recent years, alternative sources of income, mostly relying on readers, are being developed. Three main audience revenues can be listed: subscriptions, which require to pay for access to news items; donations, in which readers are asked to contribute to the production costs of articles accessible for free; membership, which allows readers to support a cause they believe in. According to the authors, during the last year there were positive developments in the increase of non-traditional revenues. However, readers' revenues do not come without problems, as they raise an ethical dilemma: low-income people would have limited access to quality content.

As happened in other sectors, to counter the Covid-19 related effect, journalists have been protected by the use of job retention schemes. However, not all journalists were granted some level of protection. While employed journalists were safeguarded, freelancers and journalists with non-standard contracts were covered only to a smaller extent, when not excluded altogether. Due to the cuts in newsrooms’ budgets, the demand for freelancers decreased in almost every country analysed.

In conclusion, the authors highlight the need to include the media sector in the national recovery and resilience plans and to eliminate, or at least mitigate, the dualism in the journalistic labour market.