Media Freedom in Europe in the Shadow of COVID-19

A monitoring report by IPI highlighting the threats of legislation, new regulations, fake news and advertising under the pressure of the pandemic 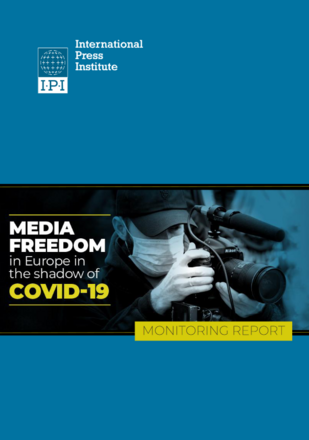 This report by the International Press Institute (IPI) presentsa summary of the effect that COVID-19 has had on press and media freedom in the EU, analysing main types of violations and attacks monitored in the last 10 months, documenting the key trends observed during this time, and assessing their impact on press freedom within Europe.

The monitoring report presents a summary of the violations arising from the pandemic that IPI has documented throughout the year on its COVID-19 Press Freedom Tracker and through its reporting series by correspondents across Europe.

The decline of press freedom is a phenomenon of the last few years: rising authoritarianism and populism, political systems in which free media are increasingly seen as opponents or “enemies”,  increased challenges from digital surveillance, declining levels of public trust, and an existential financial crisis caused by seismic shifts in the way journalism is consumed and paid for. The COVID-19 pandemic struck right in the middle of these overlapping political, technological and  economic crises, aggravating existing issues and leading to restrictions and violations on a scale unprecedented in recent years.

The pandemic-driven restrictions on fundamental rights, the greatest since the SecondWorld War, clearly placed pressure on the rights of the media and journalists, and the crisis had undoubtedly challenged the profession’s ability to remain an effective watchdog.

The culture of transparency and access to information has been significantly compromised and the struggle to contain online disinformation has legitimized powers that can be easily turned against independent critical journalism. Increased state surveillance architecture is also posing more threats to source protection and creating further risks for journalists wanting to pursue certain stories. And  the misuse of financial tools to reward and punish media have proved their effectiveness encouraging further abuse in the future.