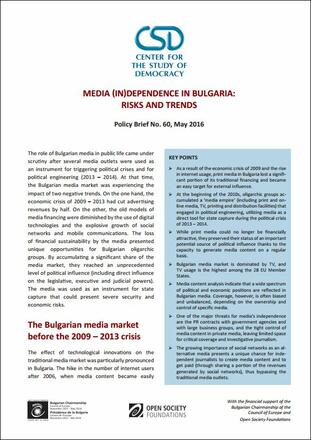 Analysts Tihomir Bezlov and Dr. Lybomir Kutin curated this new study on the media situation in Bulgaria published by the Centre for the Study of Democracy.

The study pays specific attention to the print media sector in Bulgaria, highlighting the dramatic dependence of this sector from oligarchic structures. Following the economic crisis which hit Bulgaria in 2009 and the rise in internet usage, print media in Bulgaria have suffered a significant erosion of their traditional source of financing, hence becoming an easy target for external influence. At the beginning of the 2010s, oligarchic groups accumulated a ‘media empire’ (including print and online media, TV, printing and distribution facilities) that engaged in political engineering, utilizing media as a direct tool for state capture during the political crisis of 2013 – 2014.

While print media could no longer be financially attractive, they preserved their status of an important potential source of political influence thanks to the capacity to generate media content on a regular basis.

Bulgarian media market is dominated by TV, and TV usage is the highest among the 28 EU Member States. Media content analysis indicate that a wide spectrum of political and economic positions are reflected in Bulgarian media. Coverage, however, is often biased and unbalanced, depending on the ownership and control of specific media.

One of the major threats for media’s independence are the PR contracts with government agencies and with large business groups, and the tight control of media content in private media, leaving limited space for critical coverage and investigative journalism. The growing importance of social networks as an alternative media presents a unique chance for independent journalists to create media content and to get paid (through sharing a portion of the revenues generated by social networks), thus bypassing the traditional media outlets.